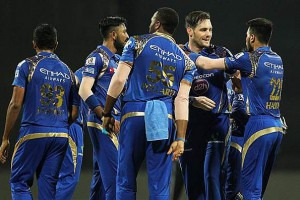 NEW DELHI: Rajasthan government has agreed to host Indian Premier League (IPL) matches at the Sawai Man Singh Stadium in Jaipur. Rajasthan State Sports Council (RSSC) will organise defending champions Mumbai Indians matches in May in Jaipur.
Rajasthan Cricket Association (RCA), which was suspended by the BCCI, will extend its support and technical assistance to the state government.

Rajasthan Sports Minister Gajender Singh Khimsar said that a five-member Apex Committee will be set up under the chairmanship of Secretary, RSSC, with two non-RCA members, one representative each of the BCCI and Mumbai Indians to hold the IPL matches.
The decision was made at a meeting between the Rajasthan government, RCA functionaries, RSSC and BCCI officials. The meeting was chaired by the minister and RCA deputy president Mehmood M Abidi.

Following the verdict of Bombay High Court to shift IPL matches out of the drought-hit Maharashtra after April 30, the league’s chairman Rajeev Shukla on Sunday announced that Mumbai Indians have decided to play their home matches in Jaipur.
Maharashtra – home to Rising Pune Supergiants and Mumbai Indians – was to host 13 games next month, including the final in Mumbai on 29th May. Pune opted for Visakhapatnam as their home ground.