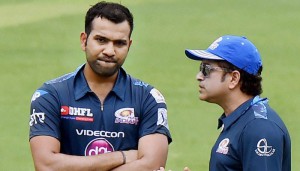 AHMEDABAD: Buoyed by their thrilling last-ball win against Delhi Daredevils, a confident Rajasthan Royals will take on a beleaguered Mumbai Indians in an Indian Premier League cricket encounter, here on Tuesday.
Having won their first two matches on the road, the Steven Smith-led side will be playing their first match in their “adopted home” venue of Sardar Patel Stadium in Motera. For Royals, the tournament couldn’t have started on a better note as they had two contrasting victories in their first two games.
While the the 26-run win against Kings XI Punjab in Pune was a walk in the park, the Royals were stretched to the limit by Daredevils in their second match where Tim Southee got them home with a splendid last-ball boundary.
The IPL unearths new talent every year and the talk after the first five days has been about young Baroda all-rounder Deepak Hooda, who has surprised one and all with composure and big-hitting abilities.
The 25-ball-54 against DD has made the young Haryanvi ‘talk of the town’ and with Ajinkya Rahane and Smith for company, the youngster would be expected to blossom further. For Mumbai Indians, it’s been the worst start possible as they were comfortably beaten by seven wickets in their opening encounter against defending champions Kolkata Knight Riders while Harbhajan Singh’s individual brilliance could not stop them from losing the second match by 18 runs.
On paper, Royals will start as favourites but MI can’t be written off. Even during last season, they had lost five matches on trot in the UAE leg before recovering remarkably to make it to the play-offs.

But batting has been a bit of a bother for MI, who have icons like Sachin Tendulkar, Anil Kumble and Ricky Ponting on board to help the players. Barring Rohit Sharma in the first game and Harbhajan Singh in the second game, the MI top-order has not performed as per expectations.