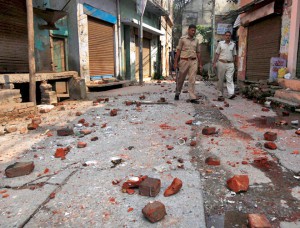 NEW DELHI: The one-man commission of Justice (retd) Vishnu Sahai that probed the 2013 Muzaffarnagar riots has said intelligence failure and laxity on the part of two senior police officials led to the violence that left 62 people dead.
The 700-page report tabled in the State Assembly on Sunday said the riots, following the murder of two persons by a youth from a minority community in Kawal town on August 27, 2013, took place as the then inspector of intelligence unit Prabal Pratap Singh failed to give an exact number of people going to attend a mahapanchayat at Mandaur.
The proceedings of the mahapanchayat were not recorded and there was laxity on the part of the then SSP Subhash Chandra Dubey due to which violence spread to Saharanpur, Shamli, Baghpat and Meerut, it said.
The commission sought to know from the then DM Kaushal Raj Sharma as to what law and order arrangements had been made in the wake of the mahapanchayat and why it was not videographed.

It also said transfer of the then DM Surendra Singh, who was replaced by Mr. Sharma, and SSP Manjil Saini before the riots led to resentment among members of the Jat community.
Besides, the release of 14 people arrested in connection with the Kawal incident gave a message that the government was favouring a specific community.
Referring to a case registered against BJP MLA Sangeet Som and 229 others for uploading an objectionable video on YouTube, the commission said it was of the view that under Article 20(2) of the Constitution no other penal action could be taken against them.

Similarly, a penal action could not be taken against the then MP Qadir Rana and others for using objectionable language at Fakkarshah crossing on August 30, 2013, it said.The commission also said the media exaggerated the reports regarding the violence and spread rumors.