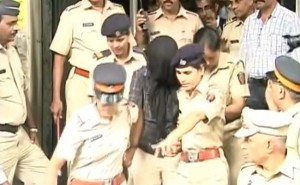 MUMBAI: Indrani Mukerjea, arrested a week ago for the 2012 murder of her daughter Sheena Bora, was today produced in a court in Mumbai, where the police added two more charges against her including attempted murder. Her other daughter Vidhie broke down on seeing her.
Indrani Mukerjea’s lawyers told the court that she had been denied basic rights in prison and not allowed to meet her family. She has been interrogated for 80 to 90 hours since her arrest and has not been allowed a minute of legal counselling, they argued.
Ms Mukerjea’s request for home-cooked food was opposed by the prosecution, which argued that she could be poisoned.
Ms Mukerjea appeared stoic in the beginning but fainted briefly in court. Sources in her legal team say Ms Mukerjea has been physically abused by the police, a complaint that has been shared in a call with Mumbai police chief Rakesh Maria.
Besides the murder of her daughter, Ms Mukerjea was today accused of attempting to murder her son Mekhail and trying to poison him.
The police say they are looking into whether Ms Mukerjea, a former media executive, tried to hire a contract killer to murder Mekhail Bora around the same time when her daughter was killed in 2012. Ms Mukerjea had always introduced her children as her younger siblings.
Mekhail Bora says his mother made multiple attempts to have him killed. On the same day that his sister was strangled in a car in the heart of Mumbai, he was drugged by her and her ex-husband Sanjeev Khanna, who has also been arrested along with Ms Mukerjea’s driver for the killing of Ms Bora.
Ms Mukerjea told friends and family that Ms Bora had gone to the US. Instead, Ms Bora had been killed in April 2012, her body moved in a suitcase to a forest on the outskirts of Mumbai, and then set on fire. The police yesterday found one of the suitcases allegedly used to transport the corpse. Last week, they also claimed to have found Ms Bora’s skull.
Sanjeev Khanna, the second of Ms Mukerhjea’s three husbands, is the father of Vidhie. He has reportedly confessed to the crime, but told the police that he played a part in the gruesome crime because his ex-wife claimed that the Bora siblings were planning to kill Vidhie.
Ms Mukerjea has been married since 2002 to Peter Mukerjea, who was the CEO of Star TV in India; the couple co-founded a broadcasting group named INX Media in 2007, then exited it two years later amid allegations of embezzlement.Reports suggest that Sheena and Mekhail were Indrani’s children with her first husband, Siddharth Das.
The Boras were brought up by Ms Mukerjea’s parents in Guwahati. As a teenager, Sheena Bora shifted to Mumbai to live with Ms Mukerjea and attend St Xavier’s college. She met and fell in love with Rahul Mukerjea, the son of Peter Mukerjea from a previous marriage.