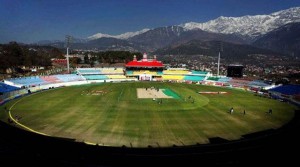 NEW DELHI: The much-anticipated World Twenty20 cricket match between India and Pakistan will be held as scheduled in Dharamsala. This was announced by tournament Director M V Sridhar in New Delhi today.
Tournament Director said the state and central governments are on board and all security arrangements have been made. This was decided after a meeting with Special Secretary Internal Security in the Home Ministry. Mr. Sridhar, however, said discussions with Home Ministry officials remained inconclusive and a few issues are yet to be sorted out.
Pakistan will play against India on 19th of this month in Dharamsala in Himachal Pradesh. There had been some opposition in the state, including from ex-servicemen, on holding the match at the hill station. Besides the Dharamsala match, Pakistan will play two matches in Mohali, Punjab on 22nd and against Australia on 25th of this month. The Pakistani team will also play a match in Kolkata on 16th before the Indian encounter.