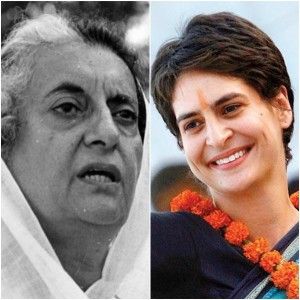 NEW DELHI: Congress veteran and former PM Indira Gandhi’s close aide ML Fotedar has claimed that Indira had predicted her death days before she was assassinated and wished her granddaughter Priyanka Gandhi to step in her shoes.
Indira’s long time political advisor also said that the former prime minister saw potential in Priyanka and was certain that she had the ability to become a great leader and carry forward her political legacy.
According to a report published in an English daily, Fotedar said that Indira had told him that the next century belonged to Priyanka.He said that three days before Indira was assassinated, they were both in Kashmir where one day after visiting a temple there they sat there and relaxed, it is then when began talking to him about Priyanka and her potential.
Fotedar further sad, “I was taken aback by the manner in which she opened up. Maybe she had a premonition that her end was imminent and she felt the need to talk about her desire to see Priyanka become a leader. I felt her words were really important. That night, I wrote down every word she said that day about Priyanka.”
Although, he said that Sonia Gandhi did not seem to agree with Indira’s suggestion. He said, “After Indiraji’s death, I
told Rajiv [Gandhi] about Indira’s views on Priyanka.
I have also told Soniaji about Indiraji’s desire to see Priyanka as a leader.
I do see a lot of similarity between Indiraji and Priyanka.
I feel Priyanka has the same aggression that Indiraji had as a leader. The Priyanka we are seeing today is nothing.
Just wait and watch. As Indiraji said, the next century belongs to Priyanka​.”
Indira Gandhi was assassinated on October 31, 1984 in Delhi. The Gandhi loyalist, ML Fotedar’s recollection of the olden times will be soon released in his book Chinar Leaves  on October 30.