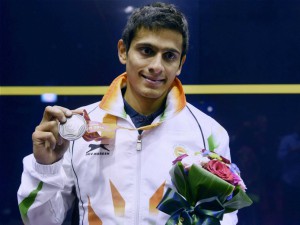 With a Grand Slam title, an Asian Games gold, and a first ever year ending WTA title, 2014 was truly Sania Mirza’s year. Kidambi Srikanth made it his year with just one win. While shooter Jitu Rai made a habit of winning a medal in every tournament he competed. Amidst these spectacular achievements, it’s easy to forget some of our other athletes, who left a mark in their respective disciplines this year. Here are five of them, who deserve a special mention:
SAURAV GHOSAL
“I’m just a happy man, really really happy”, a beaming, almost choking Saurav Ghosal said, after leading the Indian men’s squash team to a historic gold at the 2014 Asian Games, in Incheon, South Korea. Two days back, Saurav had lost the men’s singles final to Kuwait’s Abdullah al Mezayen, in 5 games. His silver was also a first for an Indian, but the loss had left Saurav gutted.
“The way I lost the singles final, it’s going to hurt a lot. But had I lost today in the team final, I wouldn’t have been able to forgive myself. My teammates, these guys are friends for life. And the relationship I share with them, means much more to me”, the Kolkata boy said. And that perhaps epitomizes the spirit of the current Indian squash team, that’s easily has had its greatest year. Earlier in the year, Dipika Pallikal and Joshna Chinnappa won a doubles gold at the Commonwealth Games in Glasgow, again a first. With the girls making headlines, men’s squash mostly goes unnoticed in India. Perhaps because it’s not an Olympic sport. But with one historic medal from the Commonwealth Games, and four medals from the Asian Games, 2014 was a landmark year for Indian squash.
DIPA KARMAKAR
At the Commonwealth Games in Glasgow, Dipa Karmakar went where no Indian woman has ever gone. Her bronze in the women’s vault event, is the first international gymnastics medal by any Indian woman.
What makes Dipa’s feat even more special is the fact that she attempted a Produnova. It involves a handspring double front vault, that is downright dangerous, and is hence currently attempted by just three gymnasts in the world, Dipa being one of them. The Agartala girl hopes her performance in Glasgow doesn’t go down as a flash in the pan. She knows that’s easier said than done. For now, she’s please “at least people don’t think of just circus when you say you’re a gymnast.”
MANDEEP KAUR
When she was banned in 2010 with five of her teammates for having taken banned substances, Mandeep Kaur thought it would be safe to say her athletics career was over. The gold medallist from the 2010 Commonwealth and Asian Games, tied the knot and was ready for a fully domestic life. Before changing her mind, and giving athletics one more shot, once the 2 year ban on her was lifted. Mandeep returned to top level competition only this year, and lead the 4x400m relay team to a gold in the Asian Games.
“I was shooed from every place when I asked them if I could train there. This medal is a slap on the faces of all my critics, and those who believed I was on drugs”, Mandeep said.
SUSHIL KUMAR AND YOGESHWAR DUTT
Fourteen wrestlers, 13 medals. It was a spectacular showing from India’s grapplers at the Commonwealth Games in Glasgow, with Olympic medallists Sushil Kumar and Yogeshwar Dutt, both of who were fighting in new weight categories, leading the charge. Yogeshwar in fact ended India’s 28 year long wait for an Asian Games gold, just a month later.
With their eyes on the Rio Olympics of 2016, India’s wrestlers competed in limited tournaments this year. But even in those limited opportunities, they didn’t fail to impress.
PR SREEJESH
He always does well against Pakistan, and in a penalty shoot out, PR Sreejesh does even better. A historic Asian Games gold, that helped India book a berth for the Rio Olympics, maybe the year’s highlight for the Indian men’s hockey team. And it wouldn’t have been possible without goalkeeper Sreejesh and his heroics during a thrilling penalty shoot out in the final of the Asian Games. Unfortunately, he couldn’t do the same in the Champions Trophy, where the arch rivals met in the semi-final. But he is going to be a very important cog in the wheel, as India prepare for the Olympics.