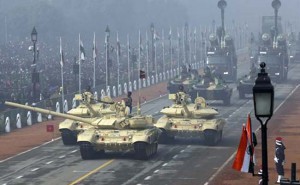 NEW DELHI: A contingent of French soldiers added to the colours of the 67th Republic Day Parade in Delhi today, where French President Francois Hollande was the chief guest.
His presence was a mark of the closer ties between the two nations that cover diverse areas including trade, technology, space, clean energy and defence.
For the first time, a contingent from the French 35th Infantry Regiment – elements of which had served in India in 1781-84 – was given the honour of leading the marching contingents and it performed with panache, preceded by a pipes and drums band and saluting in a rather unusual style with the right hand held straight across the chest.
French 35th Infantry Regiment led the marching contingents and it performed with panache, preceded by a pipes and drums comprising 48 musicians, led by Major Jean-Claude Leberruyer.
The soldiers of France’s 35th Infantry Regiment, which was deployed in India between 1781 and 1784, was led by Lieutenant Colonel Paul Bury.
The parade had started this morning amid unprecedented security that included anti-aircraft guns, 15,000 CCTV cameras and around 1000 snipers. The preparations come following a recent security review where officials concluded there is a “very real” ISIS threat on the occasion.
The celebrations began with Prime Minister Narendra Modi driving to the Amar Jawan Jyoti, memorial to the Unknown Soldier at India Gate, and laying a wreath in honour of the soldiers who have died in the battles since World War I.
Elysee, the official twitter handle of the French Republic, posted during the event, calling attention to the various tableaux, including the one on PM Modi’s Digital India initiative.
The parade this year was shorter – there were fewer marching contingents and massed bands. Instead of a marching continent of ex-servicemen, there was a tableau dedicated to them.
An army dog squad with handlers made an appearance after 26 years. In another break with tradition, the young recipients of the National Awards for Bravery came towards the end.
Ashok Chakra, the country’s highest gallantry award in peacetime, was presented to the widow of Lance Naik Mohan Nath Goswami of the Parachute Regiment. Lance Naik Goswami had died in Kashmir in September 2015, killing 10 terrorists in 11 days.
Vice President Hamid Ansari, the three service chiefs, Congress president Sonia Gandhi, cabinet ministers, a host of dignitaries and a group of women achievers were seated in a special enclosure to witness the hour-and-half long parade.
President Hollande, who had landed in Chandigarh on Sunday in view of the security threat, will be leaving from Delhi at 2 pm.Thousands of people on both sides of the imposing Rajpath, India’s ceremonial boulevard facing the seat of power Raisina Hills, braved the winter chill and cheered loudly as the marching contingents and tableaux went past them.
The synchronised military and police contingents led by General Officer Commanding (Delhi), Lt General Rajan Ravindran marched proudly to the lilting tunes of the bands through Rajpath where President Pranab Mukherjee, the Supreme Commander of the Armed Forces, took the salute from a specially erected dais.
Earlier, Hollande, who is on a three-day state visit, arrived with Mukherjee and was received by Modi who introduced him to the three services chief — Army, Air Force and Navy.
After a gap of 26 years, Army’s dog squad drawn from the Remount Veterinary Corps also took part in the parade.For the first time, the tableau of ex-servicemen of Army veterans also showcased in the parade.
Apart from India’s missile firing capability T-90 ‘Bhishma’ tank, Infantry Combat Vehicle BMP II (Sarath), Mobile Autonomous Launcher of the BrahMos Missile System, Akash Weapon System, Smerch Launcher Vehicles, the highlights of the parade also included a canine squad.