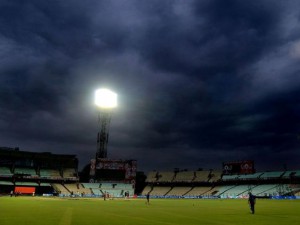 NEW DELHI: The World Twenty20 clash between arch-rivals India and Pakistan was on Wednesday shifted to Kolkata from Dharamsala in view of security concerns, putting an end to the uncertainty and suspense over the fate of the high-profile match.
The ICC announced the relocation of the match to Kolkata’s Eden Gardens where Pakistan will stay during the initial stages of the event.
“A decision has been taken to relocate the India-Pakistan match from Dharamsala to Kolkata due to security reasons. The match will now be played at the same time and date (March 19, 7:30pm),” ICC Chief Executive Officer Dave Richardson said at a press conference.

“The concerns initially arose following alleged public comments recently reported by the Chief Minister of Himachal Pradesh, warning of demonstration and attempt to disrupt the peaceful conduct of the match. Our concerns relate both to uncertainty as to the level of those threats as well as the level of commitment to implement any security plan developed to mitigate such treats,” he said, explaining the decision.
The match ran into trouble after the Himachal Pradesh government expressed its inability to provide security for the match, leaving the BCCI in a bind.
“The decision was not taken lightly. The ICC and the BCCI understand the disappointment that is likely to be felt by many over the decision to move the match. But the safety and security of the event is of paramount importance to the ICC and we have taken into consideration the concerns shared with us by our security advisors as well as Pakistan Cricket Board,” the ICC CEO said.
Meanwhile , The PCB chairman Shaharyar Khan welcomed the ICC’s decision to shift the venue but kept the Pakistan team’s departure on hold awaiting an assurance from the Indian government.
“Both men and women teams [departure] have been deferred. I have also informed this to the government because it has asked for my opinion,” he said at a press conference.
“Pakistan government has not talked with the Indian government. This threat is on us so the PCB has talked with the Indian government. It is the PCB that is raising this issue with the BCCI, ICC and the government of India that this assurance should be given by India. We have not given any deadline.”