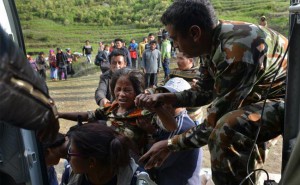 KATHMANDU: India and 33 other nations have been asked by Nepal to pull out their rescue teams nine days after the massive earthquake that has left at least 7,300 people dead in the tiny Himalayan country.Teams from Japan, Turkey, Ukraine, UK and Netherlands have begun the process of leaving.
The foreign ministry said on Monday that the Nepal government had asked countries to remove their “first response” teams as the focus is now on relief, rather than rescue.Speculation that the Nepal government is angry with India was emphatically denied by both countries.
“Nepal is not at all angry with India. Please be positive, no negativity,” said Deep Upadhyay, Nepal’s envoy to India.”Nepal now needs rubble removal equipment and has asked India for help. An army engineering team will be going,” said the Indian foreign ministry.
India’s National Disaster Response Force has the largest presence in Nepal; 16 teams of nearly 50 personnel each are involved in the Herculean rescue efforts mounted after the April 25 earthquake. China, with nearly 400 personnel, is the second largest contingent.
“The first responders, the people digging through rubble, those who came with search dogs, those who came with paramedics can now begin the process of leaving,” sources told Reporters.
Nepal has all but given up hope of finding any more survivors.”In the disaster relief framework, there are standard operating procedures, clear cut directives, that you slowly leave and the state has the resilience to get back on its own feet,” Nepal’s Army Chief General Gaurav SJB Rana said in an interview to a TV Channel.
The distribution of aid to survivors has been a major challenge for Nepal. International agencies are worried that relief material pouring in from across the world is piling up at the airport, and has not yet reached thousands of affected people.
The quake brought down thousands of buildings in Kathmandu and severely damaged communication facilities, roads and bridges.