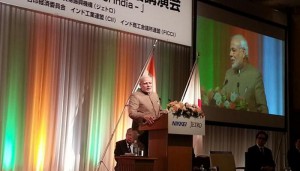 TOKYO: In a bid to woo Japanese businessmen, Prime Minister Narendra Modi on Tuesday said he hoped the island nation in East Asia will follow “Look at India” policy. “Just as India is focusing on Look East policy, we expect Look at India policy from Japan,” Modi said, adding India should replicate the Japanese model of work culture at home to attract Japanese investment.
“If we can provide similar work culture, governance and efficiency that Japan has, we can make them feel at home in India,” Modi said while addressing the keynote address at the Tokyo Stock Exchange, co-hosted by Japan External Trade Organization (Jetro). Related Stories He told Japanese investors that if they were looking for investment and growth, there is no better place than India.
“I have come here to assure you that if you have to look anywhere outside Japan, you do not need to look here or there. I assure you that there is no better place than India for your growth and expansion,” Modi said on the fourth day of his five-day Japan sojourn. Modi also recalled the major initiative launched by former prime minister Atal Bihari Vajpayee — the Look East Policy — to strengthen India-Japan relations and said it had now taken firm shape.
The PM told the Japanese businessmen that India and Japan are incomplete without each other as the former is known for software and the latter for hardware. Stressing that it was important for Japan to move to low cost hubs of manufacturing, Modi said that he wanted to encourage and invite Japanese companies and small scale industries to come to India for tech hardware manufacturing, job creation, and quality production.
Allaying the businessmen’s concerns, the Prime Minister said: “I’ve come to assure you there is no red tape but only red carpet that awaits you in India…We have eased off lot of regulations.” Boasting India’s image, Modi said the South Asian country has the youngest population in the world and these young minds with their skills can create miracles. Modi said India was also the only place where the Japanese industry will pleasantly find all the three ‘Ds” — democracy, demography and demand.
The Prime Minister said India now has a government that is working on development and wants to step up manufacturing. He said he wished for India what he himself experienced when he was young and he did not have to think twice if a product said “Made in Japan”. “India and Japan can create history in the economic sector,” added Modi, whilce concluding his keynote address. According to the organisers, some 4,000 people had wanted to hear Modi speak at the event, hoping for an interaction as well, but only 2,000 could be accommodated.