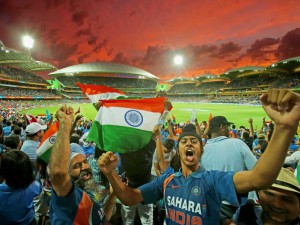 ADELAIDE: India consigned Pakistan to a humiliating 76-run defeat in their first match of Cricket World Cup 2015 in Adelaide on Sunday. This was India’s sixth straight World Cup win over their arch-rivals. Defending champions India rode Virat Kohli’s brilliant 107 to score 300/7 after skipper MS Dhoni won the toss and decided to bat. Mohammed Shami took 4 for 35 to send Pakistan crashing.

Sunday’s result was India’s first big victory in almost three months the team has been in Australia. India had lost the Test series versus Australia 2-0 and didn’t qualify for the trination final. Australia defeated England to win the championship.
Pakistan started well but lost their way due to poor shot selection. Skipper Misbah-ul-Haq’s 76 went in vain as Pakistan lost wickets in bunches and never recovered. Indian bowling was backed by smart fielding as Ravindra Jadeja and Suresh Raina took some match-winning catches.
Opener Ahmed Shehzad (47) and Haris Sohail (36) blew good starts and veteran batsmen Younis Khan and Shahid Afridi failed to come to the party. Afridi, typically, was out to a booming loose stroke.
Earlier, Kohli scored an imperious century to steer India to an imposing 300 for seven as they opened their World Cup defence in a frenzied atmosphere at the Adelaide Oval.
The much-anticipated Pool B grudge match attracted a noisy full house to the recently revamped ground with up to a billion tuning in on the sub-continent and around the world.It was the two thirds of the crowd dressed in the blue of India, though, who had the most to cheer about after India won the toss and chose to bat, Kohli brushing off his recent poor one-day form with a knock of 107.
Dropped from a difficult chance by Yasir Shah off Shahid Afridi on seven and again by wicketkeeper Umar Akmal on 76, Kohli otherwise played within himself and gave few chances in his 126-ball innings.
Pakistan, who have never beaten their neighbours in five previous World Cup meetings, had made an early breakthrough when Rohit Sharma misjudged the bounce of a Sohail Khan delivery and spooned the ball to Misbah for 15.
That brought Kohli in to join Shikhar Dhawan and the pair set about ruthlessly snatching the momentum away from the Pakistanis with a dominant partnership of 129.
Their previously slick running between the wickets deserted them in the 30th over, however, and Dhawan was sent back by Kohli only to be run out for 73 by a direct hit.Suresh Raina came in to join Kohli but there was no letup in the pace of Indian scoring with the left-hander bludgeoning three sixes in his 40-ball half century.
Kohli reached his hundred with a single to long on, whipping off his helmet to celebrate his 22nd century in one-dayers and the first by an Indian in a World Cup match against Pakistan.
Two balls later and Raina was celebrating his fifty but soon after raising his bat he was continuing the onslaught on the bowling to help drive the third-wicket partnership to 110.
They were separated when Kohli was caught behind after slashing at a Sohail delivery and Raina joined his team mate back in the dressing room soon afterwards for 74 when he holed out to the same bowler in the deep.
Sohail, who took 5-55 in his first one-dayer since 2011, helped wrest back some momentum for Pakistan, securing his five-wicket haul as Dhoni (18), Ravindra Jadeja (3) and Ajinkya Rahane (0) were sent back in the last two overs.