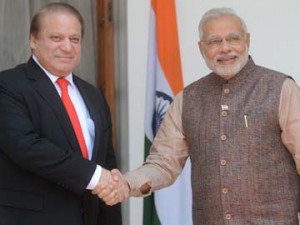 NEW DELHI : On his first full day as Prime Minister, Narendra Modi talked tough with his Pakistani counterpart Nawaz Sharif, raising cross-border terror and the 26/11 trial in a 50-minute meeting that many see as an ice-breaker.
Sources said the new PM had a five-point agenda for his talks with Mr Sharif, who was among the eight South Asian leaders invited to witness Mr Modi’s grand swearing-in ceremony yesterday at the presidential palace Rashtrapati Bhavan.
Mr Modi, sources said, stressed that terror attacks must end. He reportedly told Mr Sharif that the trial in Pakistan of those accused in the 2008 Mumbai terror attacks was “too slow” and no action had been taken the plotters.
The attack on the Indian consulate at Herat in Afghanistan on Friday was also reportedly discussed. The Indian foreign ministry had said they believed the attack was planned “beyond the borders of Afghanistan.” Afghan president Hamid Karzai has blamed Pakistan-based terror group Lashkar-e-Taiba.
While campaigning for the national election, Mr Modi had repeatedly targeted the Congress-led government for engaging with Pakistan despite relentless attacks from across the border, and for what he called its “weak foreign policy.”
Foreign Minister Sushma Swaraj was with Mr Modi for his bilateral interactions with Mr Sharif and other South Asian leaders.Mr Sharif later left to meet Atal Bihari Vajpayee, who was the prime minister when he last visited India.
On Monday, Mr Sharif told NDTV, “We should remove fears, mistrust and misgivings about each other. I want to pick up the broken threads from where Mr Vajpayee and I left off in 1999.” The Pakistani leader earlier visited the Red Fort, Chandni Chowk and Jama Masjid in the old quarters of Delhi.
India and Pakistan, who have fought three wars since Independence in 1947, have shared frosty ties in the past year over border tension that escalated with the killing of Indian soldiers by Pakistani troops.