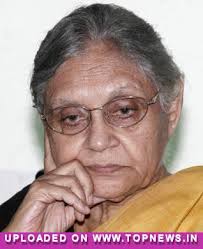 NEW DELHI : The Narendra Modi government has made its intent clear – it wants nearly 12 Governors appointed by its predecessor to resign. So far, one has obliged  – BL Joshi of Uttar Pradesh . Three others denied reports that they would quit.
The opposition Congress said the government’s push for resignations is not just politically incorrect but in violation of a Supreme Court order from 2010 which forbids the dismissal of governors “in an arbitrary and capricious manner with the change of power.”
The court ruling was in response to a petition by a BJP MP who challenged the removal of governors appointed by the BJP-led regime when the UPA took power in 2004.In its plans for governors, the new government has created two categories: those who have more than two years left in office should exit; seven others who have nearly completed their terms will be spared.
Not Sheila Dikshit. Home secretary Anil Goswami reportedly phoned her to ask if she would resign. To him and to reporters, her response was non-committal.
“I can’t react to rumours,” the 76-year-old said. She was posted as Governor of Kerala in March after she led the Congress to a humiliating defeating the Delhi state election after three terms in power.
Her son, Sandeep Dikshit, who is a Congressman, said, “Who is the Home Secretary to call a Governor? Governors are constitutional posts. There is a Supreme Court ruling that governors can’t be removed on whims and caprice.”
The government believes it is within its right to appoint governors of its choice.
“The country is not the property of any party,” disagreed Naresh Agarwal of the Samajwadi Party, which rules Uttar Pradesh, whose governor quit today.
Rajasthan Governor Margaret Alva, who met the PM yesterday , and Karnataka Governor HR Bhardwaj and Assam Governor JB Patnaik, who met President Pranab Mukherjee, all denied speculation that they were surrendering their offices.”No one asked me for it and I won’t resign,” said the Karnataka governor firmly.