AMETHI: Rahul Gandhi today hit back after Narendra Modi described his sister Priyanka Gandhi Vadra’s comment on “Neech Rajniti (low-level politics) as a caste slur at him.”Neech karm hote hain, neech soch hoti hain, neech jaati nahin hoti (A person is judged by his deeds and thinking, not by his caste)” Mr Gandhi said as he visited Amethi on polling day, betraying signs of nervousness for the Congress in one of its safest seats after Mr Modi’s visit in the final hours of campaigning.
The Congress vice president hadn’t visited the constituency during voting in the 2009 election. 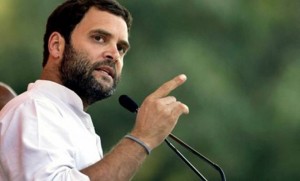 The BJP’s prime ministerial candidate broke an unwritten code against top leaders stepping into each others’ turf as he campaigned for his party’s candidate in Amethi, Smriti Irani, and declared there, “I want to start rebuilding India from Amethi.” Hours after Mr Modi targeted the Gandhis in his speech, Priyanka, 42, said he had “insulted my martyred father” on Amethi’s soil. “For this neech rajniti, each polling booth in Amethi will exact revenge,” she said.
Mr Modi, 63, charged Priyanka with attacking him for his “backward caste”.
“I cannot deny I was born into a ‘neechi jaati‘ (backward caste) but is that a crime?” asked Mr Modi at rallies in Uttar Pradesh on Tuesday. Senior BJP leader Arun Jaitley told NDTV, “Priyanka must apologise. Her words don’t belong to grammar of Indian Politics.”Amethi has been electing Rahul Gandhi to Parliament since 2004 and last year, he won by a staggering 3.70 lakh votes, but this time, the 43-year-old faces a three-cornered contest in the seat previously held by his mother, Sonia Gandhi, and father, Rajiv.”People understand that only BJP can offer development here,” said Smriti Irani.
Arvind Kejriwal’s Aam Aadmi Party has fielded Kumar Vishwas, who said, “We have come to change the face of politics here. Amethi won’t change with one rally or waving to crowds brought from outside. One has to go to its villages.”Under Mr Modi, the BJP is expected to win the maximum seats in the national election.  Opinion polls show that the Congress placed dangerously close to its worst performance ever.