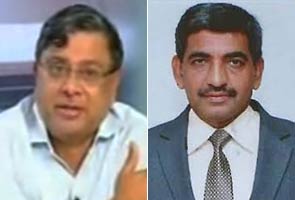 NEW DELHI: In a first, the government on Friday announced the appointment of two private bankers as the heads of state-run banks for the first time.
Former Citibank consumer banking head PS Jayakumar, who currently heads realty firm VBHC Value Homes, has been appointed as the managing director & chief executive officer of Bank of Baroda, India’s second-biggest state-run bank by assets.
Ravi Venkatesan, former chairman of Microsoft India and a board member of Infosys, will take over as the chairman of Bank of Baroda, said Financial Services Secretary Hasmukh Adhia

The government had earlier split the post of chairman and managing director for public sector banks; it was decided that there would be a non-executive chairman to guide the boards of such banks while the day-to-day management would be looked after by an MD and chief executive officer.
Rakesh Sharma, currently the head of private lender Lakshmi Vilas Bank, will be new MD & CEO of Canara Bank, Mr Adhia said.
The two appointments are part of the wider appointments for PSU heads announced by the government today; three other PSU banks — Bank of India, IDBI Bank and Punjab National Bank – will be headed by public sector veterans MO Rego, Kishor Kharat and Usha Ananthasubramanian.
The appointment of private sector bankers as heads of state-run banks is part of the government’s 7-point agenda aimed to revitalize state-run banks. In other moves, the government pledged more capital for the nearly two-dozen public sector lenders and listed steps to fight the menace of bad loans that have hurt the domestic economy.