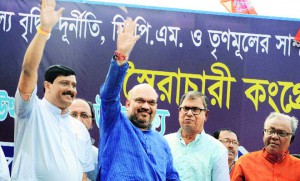 KOLKATA: As one-time Mamata Banerjee’s close journalist, now in CBI custody in connection with Sharada Chit Fund Scam (CFS), Kunal Ghosh having openly implicated “Bengal Chief Minister as a major beneficiary of Sudipta Sens’s financial escapades,’’ TMC made things easier for BJP president Amit Shah in his first visit to city on Sunday!
Shah, who began his day like Modi, offering his prayer to Goddess Mother Kali in Dakinshwar, seized the opportunity and told both the state party leaders inside a locked room, readying a vision document for next election and then in a party rally in Chowringee: “If Nandigram and Singur (Mamata Banerjee-triggered) movements signaled a change in Government, why not Sharada Scam wouldn’t signal a change?’’ “In Nandigram and Singur about 2000 or more farmers were involved, but in Saradha Scam more than 18 lakhs people were involved (cheated), this calls for a change,’’ Shah told an audience in Chowringee where he campaigned for party candidate.
He also asked Mamata Banerjee to step down as she couldn’t manage West Bengal and promised voters for 2016 elections that “BJP’ll give Bengal a stable Government.’’ According to political observers and commentators, Shah, who like Modi didn’t talk to reporters, just followed Ghosh’s explosives and its political fallouts that he set exploding yesterday.
“Before everything is proved any hints of understanding with allegedly a scam tainted Mamata would be like embracing a plague, so keep off,’’ said a political commentator, adding, “Shah after Ghosh’s explosion wasn’t left with much option of a remote-controlled understanding with TMC’s top leadership.
’’ The sudden development also made things easier for Shah as the political turbulence Ghosh’s allegations cut loose, also for the time being fudged Modi’s 100-day failed attempt to reign in food inflation, which earlier left state BJP leaders apprehensive! Incidentally, after Kunal Ghosh’s allegation, an erstwhile close journalist of Mamata Banerjee, which even left Bengal Chief Minister tongue-tied, only her party leaders criticized as “media and BJP, Congress and CPI(M) as having indulged in a conspiracy.

’’ Interestingly, a senior journalist of Sharada’s now closed media group said: “After professional editors quit, Kunal Ghosh’s directive instructed us not to write anything against Mamata Banerjee.’’ While Shah’s job was made easy today by Ghosh’s exploding “Mamata myth,’’ but organizing a “state-wide and effective organization wouldn’t be easy even at a moment when Bengal discarded Left and out of disgust might be loving to discard Mamata for her love for “criminals, anarchy and inferior people, but BJP leadership would have to find an answer to who will lead the party in Bengal?’’ Quipped a political commentator.