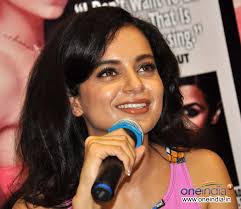 MELBOURNE: Actress Kangana Ranaut, who was the centre of attraction tonight at the Indian Film Festival of Melbourne (IFFM) 2015, feels that her mediocre looks has allowed her to take different roles in films.
Dressed in a black gown Kangana was praised and extolled by the audience for her stellar performances in Queen and Tanu Weds Manu.
While interacting with audience, Kangana shared her views of how girls need to chase their dreams. “Everyone has her own journey and women has to find herself on her own. I worked on my ambitions and plans and it was a difficult journey,” she said, adding that there was a time when she had no money to meet her ends.

Asked about her beauty, Kangana said that she found herself ordinary and her mediocre looks has allowed her to take different roles in films. National award winning actress said yoga and meditation help her to look beautiful.
The IFFM 2015 kicked off today with screening of Prashant Nair’s film Umrika. The 14-day-long festival is one of the biggest celebrations of Indian cinema in Southern Hemisphere.
Indian diaspora and Australians converged to watch the star studded opening ceremony of the festival attended by Kangana, Imran Khan, film director Nikhil Dhawan, Indian High Commissioner Navdeep Suri and Dum Lagake Haisha actress Bhumi Pednekar.
Talking to the audience, Imran Khan thanked fans for their support and love for Indian cinemas. The festival has for the first time coinciding with the Independence Day tomorrow and will be celebrated with a flag-raising ceremony followed by a mass Bollywood dance competition open to all dancers.
Speaking on the occasion, the Indian High Commissioner said that the flag hoisting to be held tomorrow at the Iconic federation square was a matter of great pride for India and Indians in Australia. The festival this year has the theme of “Equality”, which will be explored through a range of different lenses, from gender and sexuality to disability and religion.
Winners of the IFFM Awards will be announced at a red carpet gala event including fashion show tomorrow at the National Gallery of Victoria. The fashion show will feature Indian designer Anamika Khanna who will unveil a unique collection based on Indian crafts designed along with Australian designers. Actress Sonam Kapoor will be the show-stopper.