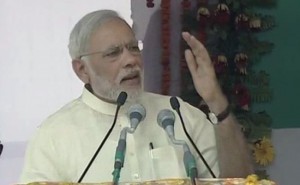 MATHURA: PM Modi begins his speech saying Bharat Mata ki Jai.
This is the land of Braj – the land of Sri Krishna. And his message was ‘karm karte raho‘.
Pandit Deen Dayal Updhyay said ‘ charaiveti, charaiveti, charaiveti‘ – keep walking tirelessly.
After 30 years you gave a single party the mandate to run the government in Delhi.
The day I was chosen as the leader in Parliament – I had said this government is dedicated to the poor.
After 365 days, I wanted to acknowledge the source of that inspiration – the person who inspired us to work for the person at the lowest strata of society.
Three thinkers have influenced Indian politics and political thought in the last 100 years – Gandhi, Lohia and Deen Dayal Upadhyay.
And all three have a common thread in their thought – the poor people of this country, India’s villages and its farmers.Would the plight of India have changed if the UPA were in power? PM Modi asks the crowd.
The hope that you see all around you, how has this change  come about?If you hadn’t taken such a big decision, imagine what the plight of this country would have been.This ‘parivartan‘ isn’t due to Modi, it is due to you (the people of India).
I will not be Pradhan Mantri (Prime Minister) but Pradhan Santri (prime guard)Have I not kept my promises…Burey din khatam hue ki nahin hue…They were giving away coal blocks to their cronies. Tum bhi looto..hum bhi lootenge.
Some people are screaming because for 60 years their voices were heard in the power circles of Delhi.
Sab logon ke acchey din aaye, par kuch logon ke burey din aaye…Dilli ke power circles mein dalalon ke liye jagah nahin hain
I had not guaranteed ‘acchey din‘ for those who had looted this country.
More than 12 crore people get gas subsidy benefits directly in their bank accounts.The middlemen are a thing of the past and days of those who looted the treasury are over.It’s been 60 years, more than 3 lakh farmers have committed suicide, I’m not here to discuss who’s responsible for that or how many have died.
I have pledged that the health of the land of the farmers will be tended to – soil health cards have been introduced.
Rajiv Gandhi had said only 15 paise reaches the villages when a rupee is allocated in Delhi. We have removed the middlemen and made such arrangement that 100 paise in that rupee reaches the villages.
Issue of farmers’ suicide must not be politicized, we must look into why farmers are unhappy after 60 years of Independence.
We’re making efforts so that farmers of the nation get adequate water and electricity.
We have taken decisions to set up, modernise fertilizer plants so that farmers get fertilizers, urea.We have started coating urea with neem. Earlier, urea would have been stolen for chemical factories but with neem coating they can’t be used for anything else.
And farmers get the much required nitrogen for their land by this neem-coated fertilizer.
We have done away with the neccessity to get documents attested by government officials, MLAs.We have taught India to trust its citizens.When I came to power I learnt Rs. 27,000 crores was in treasury and rotting. It was the money of the poor which had been deducted (as PF) and was unclaimed.
Now there is a unique identity number, so whenever you quit a job, the unique ID number is transferred – and so is the money.
Every year someone who got a pension had to prove he was alive, we used technology to put an end to that.
We will put an end to 1300 outdated laws and this will reduce the nation’s burden.In 12 rupees, you can’t buy a shroud. In 12 rupees a year of one rupee a month, my government has offered an insurance scheme of 2 lakh rupees.If you had not voted for this government, I don’t know where inflation would have been today.
We have been able to control the rising prices. In the last 1 year, foreign investment has risen 8 times to 25,000 crores.
In India there are about 6 crore small businessmen and they employ 12 crore more people.In the last one year, 6 lakh more foreign tourists have come to India.
If India has to fight poverty, the youth of the nation must get employment opportunities.I want these small businessmen to have access to bank loans – that is why we thought of the Mudra Bank to give loans from Rs. 10,000 to 10 lakhs.
We ran the Swacch Bharat campaign, toilets for women.
Don’t our mothers and sisters deserve toilets?
Hamara desh gareebon ko gandagi mai jeene ke liye majboor kare, aisi hamari Bharat Mata nahi ho sakti.
Ganga and Yamuna are both my mothers. I assure you I will complete all the work that remains to be done… I need your blessings.If I try and go through all the decisions that this government has taken in 365 days, it will take more than 365 hours.
I had promised that I will not take a vacation.
Do you have any complaints?We will get rid of poverty, make our nation economically stronger, make our nation proud globally.
Every minute we have taken new initiatives and tried to create new solutions for India.