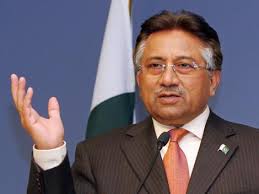 ISLAMABAD: Amid reports that the Pakistan government was under pressure to allow Pervez Musharraf to leave the country, the former military ruler on Sunday said he will not flee and defend himself in all cases. “I am not running away from Pakistan. Rather, I will defend myself in all cases before any court of law,” the 70-year-old said in a telephonic address to a small gathering of supporters at a convention of his All Pakistan Muslim League (APML) party here. He, however explained that he needed to go to see his ailing mother in Dubai but will return back.
The government has so far refused to allow him to travel abroad. In his address, Musharraf termed all cases against him as politically motivated and baseless. He also criticised the government for the economic mismanagement and said when he resigned in 2008, the country had USD 18 billion reserves as compared to only USD 4 billion to USD 5 billion today.
His remarks came hours after a close associate of Prime Minister Nawaz Sharif said the government is under pressure to let Musharraf leave the country.
“There is pressure on the government to allow General Musharraf to leave Pakistan,” Raja Zafarul Haq, Leader of the House in Senate, told the media in Rawalpindi.Haq, who is a senior leader of Sharif’s Pakistan Muslim League-Nawaz (PML-N), told Express News television that the government was under pressure on the issue but did not name the forces or individuals applying that pressure.
Analysts have said the powerful military is not happy with the treason case against Musharraf.A three-member tribunal is trying the former military ruler for imposing emergency in the country in 2007 which is considered as a treason under the Constitution and is punishable with death or life term imprisonment.
Haq claimed the anti-government agitation by controversial cleric Tahirul Qadri and the planned protests by Imran Khan on Thursday was a “drama” being staged to get Musharraf released.”Hidden forces which didn’t want legal action against Musharraf and wanted a safe exit for him are pressuring the premier,” the PML-N leader said.
Musharraf was charged on March 31 for subverting the constitution by imposing emergency.
In June, Pakistan’s Supreme Court overturned a High Court ruling to lift a travel ban slapped on Musharraf last year.Musharraf, who returned to Pakistan in March last year ahead of the general elections ending his over four-year self-imposed exile, has faced multiple trials (pti.)