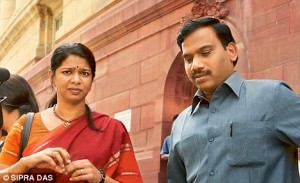 NEW DELHI : Maintaining that he acted after discussion with the Solicitor-General, the Cabinet, and “properly apprising the Prime Minister and taking his concurrence”, former Telecom Minister A. Raja, the first and the prime accused in the 2G spectrum allocation scam case, on Monday told a Delhi court that he had always acted in public interest and adhered to the TRAI’s recommendations
Mr. Raja was speaking during the recording of his statement by Special CBI Judge O.P. Saini in a question-answer format wherein he answered nearly 1,000 questions running into 871 pages from the 1,700 queries given to accused by the court in advance.
Mr. Raja said: “I have acted throughout in public interest in accordance with the law, regulatory framework and Government policy, and not for any personal gains. There has been no loss to the Exchequer and on the contrary, tariff has come down and tele density has increased manifold, leading to public savings as well as increase in revenue share of the government. I did not take any unilateral decisions, but acted on the proposals of DoT and discussions with other Cabinet Ministers and the then Solicitor-General and after properly apprising the Hon’ble Prime Minister and taking his concurrence. My actions do not amount to abuse of official position or any other offence.”
On being asked, ‘Why this case against you?, Mr. Raja said, “There was a cartel among the old GSM operators, whose interests would have been seriously affected by entry of new operators leading to reduction in tariff and ARPU. Tariff is not fixed by the Government and competition is the only way in which tariff can be brought down. The old GSM operators were also taking advantage of non-disclosure of availability of spectrum and sharing spectrum among themselves and preventing new competition, which was opposed by me.”
Earlier, he had refused to accept an Enforcement Directorate summons for him to appear before the court on May 26 in connection with a money-laundering case as it was not accompanied by a copy of the complaint and said he wanted “to subject [himself] to due process of law”.“Don’t think I am avoiding the summons. But let me know the contents of the complaint. I am ready to wait here till 10 p.m. but get the copy first,” Mr. Raja said.
However, some time later he received the summons from the court directing him to appear as accused before it pursuant to the cognisance taken of the ED complaint, which alleged that the Rs.200-crore illegal gratification resulted from the illegal actions of Mr. Raja which was ultimately parked in Kalaignar TV.