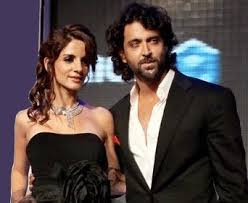 MUMBAI: Hrithik Roshan, who is weathering the storm of his divorce proceedings and seemed rejuvenated with the amazing reception to the trailer of his upcoming film Bang Bang, seems to have hit another roadblock. The Jodha Akbar star’s estranged wife Sussanne has reportedly demanded alimony to the tune of Rs 400 crores from the actor.
Hrithik and Sussanne filed for divorce by mutual consent in April this year. The final hearing in the case is slated to take place on October 31 and the custody of their children Hrihaan and Hredaan has been awarded to Sussanne.
The couple has been spotted together with their children Hridaan and Hrehaan multiple times since they announced their separation. Hrithik is reportedly very close to Sussanne’s family and is often seen in the company of her siblings Zayed and Farah.
They seemed to be putting their personal differences aside for the sake of their children but it remains to be seen if things will remain so merry after this huge demand.