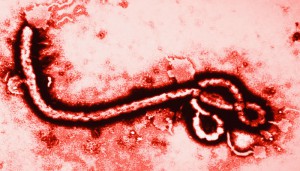 NEW DELHI: An experimental Ebola drug has cured monkeys who were infected with the West African virus.The treatment known as TKM-Ebola-Guinea targets the Ebola virus. However, it has not been tried on humans, as yet.
During the experiment, six monkeys were infected with high dose of Makona virus. Three monkeys who received the treatment were healthy at the end of the trial after 28 days. While the untreated three monkeys died within nine days.
No treatment or vaccine for the deadly Ebola has been proven to work in humans until now.In the second half of this year, results from the human trial with the drug is expected.
The drug has been produced by Tekmira Pharmaceuticals Corp and works by blocking the particular genes which prevents the virus from replicating.
More than 10,602 people have been reported as having died from the Ebola virus in six countries – Liberia, Guinea, Sierra Leone, Nigeria, US and Mali since March last year.