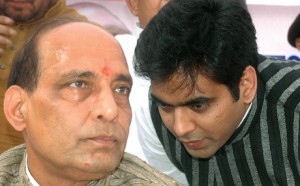 LUCKNOW: Even as rumours are doing the rounds that an insider in the Bharatiya Janata Party was responsible for leaking the story behind Rajnath Singh’s son being ticked off by Prime Minister Narendra Modi for alleged misconduct, the Union Home Minister refused to be drawn into the controversy today and asked media to find out whatever it wanted to.
When asked by journalists whether he suspected any person or leader to be behind the rumours he told them, “You are investigative journalist and you should find out who is the rumour monger,” reported.
Shortly after reports surfaced of PM’s unhappiness over some alleged misdemeanour of Singh’s son Pankaj and that he was warned about it, Rajnath had sought to scotch the matter yesterday, saying he would quit politics if even “prima facie” it is proved that any of his family member had been involved in any misconduct.A visibly upset and emotional Singh had made a brief statement to the media saying rumours about alleged wrong doings by his family members have been floating around for the last fortnight.
“In the last 15-20 days, there have been continuous rumours in the air about me and my family. I thought rumours have no basis and these will end in some days. But I am seeing that these rumours are gaining momentum day-by-day. I want to assure the nation that the day allegations, even prima facie or even small, are proven against me or my family, I will quit politics and public life and sit at home,” he had said in a hurriedly called interaction with journalists outside his office in North Block.The Prime Minister’s Office too had issued a statement saying that there was no basis on the reports doing the rounds.
Reacting sharply the PMO had said, “The reports are plain lies, motivated and constitute a malicious attempt at character assassination and tarnishing the image of the government.””Those indulging in such rumour-mongering are damaging the interest of the nation. These reports are strongly denied,” it had added.