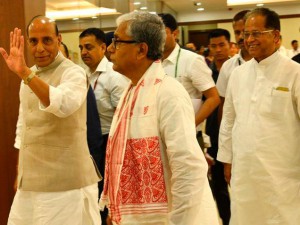 NEW DELHI: Union Home Minister Rajnath Singh on Saturday favoured reduction in deployment of central forces in the north-east in view of the improved security scenario in the region.
“In the wake of improvement in security scenario, there is a need to review deployment of security forces in the region. At present, the deployment is more than it was when the insurgency was at its peak,” he told a conference of North East Chief Ministers in Guwahati.
“I would urge all the Honourable Chief Ministers to conduct a realistic audit of deployment of Central Armed Police Forces in their States. However, I assure you of our endeavour to help you in the deployment of central forces when actually needed,” he said.

“Without compromising with security, we must plan to reduce deployment to make the environment easy and also to encourage positive thinking of outsiders about this region,” he said.
Mr. Singh congratulated all the Chief Ministers on their sustained efforts in improving the security scenario by focusing on development resulting in an “all-time low” level of insurgency in the region.
“Mizoram, Tripura, large parts of Assam and Meghalaya, and Arunachal Pradesh, except its three eastern districts, are almost free of insurgency. There is a strong popular desire for peace in Nagaland and Manipur too,” he said.
The Home Minister said several small residual insurgent groups were operating from their safe havens across the border and are engaged in kidnapping for ransom, which had almost doubled in Assam and Meghalaya.
He also said most of the youths in insurgent groups were misled and they had now realised their mistakes. “They are welcome to the mainstream. However, those who have committed heinous crimes and acts of terror will have to face the law and meet the justice,” Mr. Singh said.