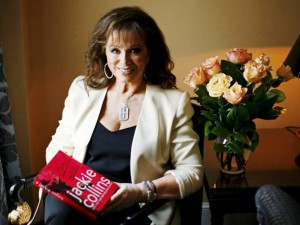 LOS ANGELES: Jackie Collins, the bestselling author of dozens of novels including Hollywood Wives that dramatised the lives of the rich and treacherous, died Saturday.
Collins died of breast cancer in Los Angeles, publicist Melody Korenbrot told The Associated Press. She was 77.“She lived a wonderfully full life and was adored by her family, friends and the millions of readers who she has been entertaining for over 4 decades,” Collins family said in a statement.
“She was a true inspiration, a trail blazer for women in fiction and a creative force. She will live on through her characters but we already miss her beyond words.”Collins’ death was first reported by People magazine.
Unlike her older sister Joan Collins, the Dynasty actress who was part of the 1980s Hollywood glitterati, Jackie Collins chose to document LA lives in her pulpy, page-turning fiction.
She began publishing novels in the late 1960s and put out several in the 1970s but had her breakthrough and became a celebrity in her own right with 1983’s Hollywood Wives.
It sold more than 15 million copies, led to sequels and became a hit TV miniseries.