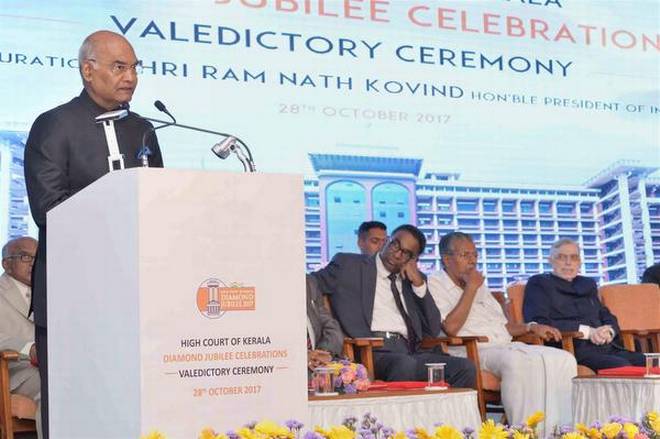 KOCHI:: President Ram Nath Kovind on Saturday suggested that there should be a system in place for providing certified translated copies of High Court judgments in local or regional languages. Inaugurating the valedictory function of the Diamond Jubilee celebrations of the Kerala High Court, Mr. Kovind said the copies of the translated High Court judgment could be provided within 24 or 36 hours after the judgment is pronounced.
The President said that the High Courts delivered judgments in English, “but we are a country of diverse languages. The litigant may not be conversant with English and the finer points of the judgment may escape him or her. The litigating parties will thus be dependent on the lawyer or another person to translate the judgment. This can add to time and cost.”
It is important to not only take justice to the people, but also to make it understandable to litigating parties in a language they know, he added.Mr. Kovind also said that delay in justice delivery is a pressing concern in the country. “Often, those who suffer are among the poorest and the most underprivileged in our society. We must find mechanisms to ensure quick disposal of cases. We could all consider an approach that makes adjournments the exception in an emergency situation rather than a tactic to prolong court proceedings.”
Chief Justice of India Deepak Misra, Union Minister for Law and Justice, Ravi Shankar Prasad, Chief Minister Pinarayi Vijayan, Chief Justice of the Kerala High Court Naviniti Prasad Singh, and Kerala Governor P. Sathasivam also spoke. President Kovind on Friday heaped praise on Kerala for the manner in which the state has developed in all sectors, and on a personal note said that it was a “happy irony” that his tenant in Kanpur was also from Kerala, a “very nice and straight-forward person”.

He showered praises on Kerala on Friday  while speaking at a civic reception organised by the Kerala government. This was his second visit to Kerala, after taking over. “Kerala’s traditions and your very thinking have been humanistic, people-oriented and democratic. The emphasis on human development and on healthcare and education here has set an example for the rest of the country,” said Kovind.

“This is true in so many ways. Being a coastal state, Kerala has led Indian engagement with foreign countries and cultures. It has been at the frontier of trade,” said Kovind.  And on a personal note about his love for Keralites, Kovind pointed out that he depended on colleagues from Kerala during his career as a lawyer.
“The irony – happy irony I should say – is that part of my home in Kanpur is now occupied by a very nice and straight-forward person from Kerala, one George. He has been our tenant for the past 10 years, and he is the best tenant anybody can hope to have,” added the President. (With Agency Inputs ).