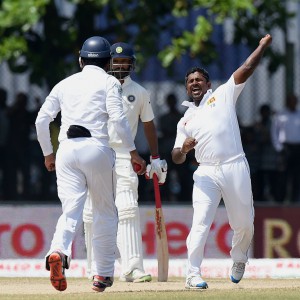 Left-arm spinner Rangana Herath picked up his 22nd five-wicket haul to put Sri Lanka on the brink of a spectacular comeback win against India on the fourth day of the opening test at Galle on Saturday.
Trailing for most of the match after being all out on the opening day for 183, the hosts scythed through the Indian order with 37-year-old Herath adding four wickets to his overnight dismissal of opening batsman Lokesh Rahul.
Off-spinner Tharindu Kaushal, who took five wickets in the first innings, provided superb support by picking up two more in the second innings as India staggered to lunch on 78-7 after resuming on 23-1. Ajinkya Rahane (18) and Ravichandran Ashwin (three) were at the crease for the tourists, who still need 98 runs for the win.
Sri Lanka looked dead and buried on 95-5 on Friday after conceding a first-innings lead of 192 but Dinesh Chandimal’s swashbuckling unbeaten 162 allowed them to stage a fightback and set India a victory target of 176. The hosts, who lost their last test series at home to Pakistan, put immense pressure on India with tight bowling and some smart catches.
India failed to find scoring opportunities, with first-innings centurion Shikhar Dhawan, unbeaten on 13 overninght, taking 36 balls to score his first run in the morning. That came from a streaky four with the ball narrowly missing the leg stump after taking an edge.
Herath, who has been off form lately and failed to take a single wicket in the first innings, picked up a wicket with his first ball of the day, sending nightwatchman Ishant Sharma out leg before.
He also accounted for the wickets of Rohit Sharma, wicketkeeper Wriddhiman Saha and Harbhajan Singh, while Kaushal picked up India captain Virat Kohli and then took a sharp return catch to send back Dhawan.