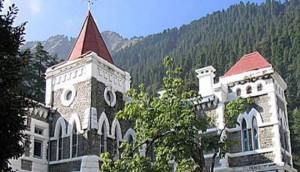 DEHRADUN: The Uttarakhand High Court today quashed the imposition of President’ rule in the state.Ordering restoration of the Harish Rawat government, the court asked the ousted Chief Minister to prove his government’s majority on the floor of the Assembly on April 29.
Coming down heavily on the Centre for the March 27 proclamation under Art 356, a division bench of the high court headed by Chief Justice K M Joseph said the imposition of the President’s rule was contrary to the law laid down by the Supreme Court.
It said it was “pained” that Government of India is behaving in this fashion – not clarifying whether it can keep revocation on hold.Allowing ousted Chief Minister Harish Rawat’s petition challenging the Presidential proclamation, the bench, also comprising Justice V K Bist, observed that the material considered for imposing President’s rule “has been found wanting”.
Upholding the disqualification of nine dissident Congress MLAs, the court said they have to pay the price of committing the “Constitutional sin” of defection by being disqualified.
The court also turned down an oral plea made by the Centre’s counsel for a stay on its judgement to move the Supreme Court against it.
The bench said it won’t stay its own judgement and added that the Centre can go to the Supreme Court and get a stay.The issue came to the division bench of the court after a single judge ordered a floor test on March 28 following controversy over the passage of Appropriation Bill on March 18 with the BJP and dissident Congress MLAs claiming the money Bill had fallen and the government has lost its majority.
A day before the floor test was to have been held, the Centre imposed President’s Rule on March 27 citing breakdown of Constitutional machinery as a ground.Harish Rawat approached the division bench challenging the imposition of the President’s Rule.

During the last three days of hearing, the court has made several strong observations against the Centre on the issue of imposition of President’s Rule in Uttarakhand.
It had said on Monday that the proclamation under Article 356, just a day ahead of the floor test, amounted to cutting at the root of democracy. Subsequently, it had observed that the government was introducing chaos and undermining an elected government.

Yesterday, it had maintained that the decision to impose President’s Rule was subject to judicial review as even the President can go wrong.
Earlier in the day today, the High Court said it would be a travesty of justice if the Centre recalls its order imposing President’s Rule and allows someone else to form a government now.The statement came after Centre’s counsel was unable to give an undertaking till a verdict is given in the present case.