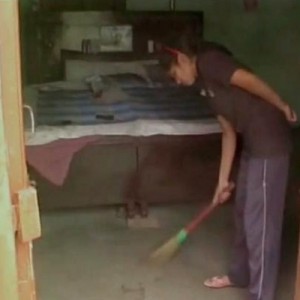 CHANDIGRAH: Government apathy has forced a state level gold medalist boxer to work as a domestic help to earn her livelihood in Haryana.
Rishu Mittal, who hails from Kaithal district, won a gold medal in 2014 in a state level boxing tournament. But the death of her parents forced her to discontinue her practice for a while.
Mittal, a tenth standard student, begins her day by going to a local stadium at 5 am. Once she is through with her practice sessions, she goes to a house to attend to daily chores before rushing to school. Her evenings are also spent practicing her skills as a pugilist.

“It has been almost two-years I have been doing this. When we had shifted here, my father was an alcoholic and had no money. My mother used to do all the household works. After she passed away I have to do all these work. I go to school, I play but due to so much work I could not win the National level boxing game,” said Mittal.

Meanwhile, Rishu’s trainer Rajinder Singh has high hopes of her but rues the fact that Mittal is unable to have the required diet.”She is very hard working but she is very poor that she cannot afford proper diet. She comes to school without eating breakfast. I believe that if she is adopted by an organisation her future will be secure,” said Singh.
Mittal is supported by her brother who also works in a nearby kiosk. Her idol is Olympic medal winning boxer Mary Kom.