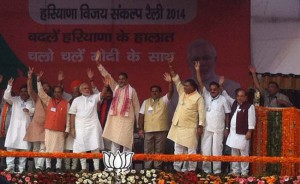 KARNAL (Haryana) :  Prime Minister Narendra Modi started his campaign blitzkrieg for the forthcoming assembly elections in Karnal in Haryana today, where he addressed an election rally and urged voters to ensure that the BJP comes to power in the state with a complete majority.
“I want you to vote for the BJP so that it forms the government with full majority. Change is important if you want to move forward. Make Haryana free from the Congress misrule,” Modi said.
During his speech, the PM talked about his ties with the state. “Haryana was instrumental in my growing years, I got my education here and (my) political training,” he said.
“Voters must ensure a victory for the BJP to ensure my continuity and link with Haryana,” said Mr Modi.Attacking the ruling Congress, the PM said, “All the governments in the past have brought misery; there was lawlessness (in the state). If you want change, you have to vote for me”.
He told the voters that they had to “rid the state of the Congress, ensure a majority and stable government”.
The Prime Minister will address 8-10 rallies in the state and two dozen rallies in Maharashtra, where the BJP is in the opposition as well, over the next 10 days.The BJP recently unhitched its three-year-old alliance with the regional Haryana Janhit Congress, led by Kuldeep Bishnoi, and also severed its 25-year-old alliance with the Shiv Sena in Maharashtra.
Both states go to polls on October 15; counting will be held on October 19.With no local face in Haryana and Maharashtra, the BJP is banking heavily on Mr Modi for campaigning for this month’s assembly elections in the two states.
The PM will also address three rallies in Maharashtra today, and end the day with a public meeting in Mumbai – at the same venue where its former ally Shiv Sena kicked off its election campaign. As both the state units place their bets on Narendra Modi, it’s a high stakes battle not just for the BJP but once again for the prime minister himself.