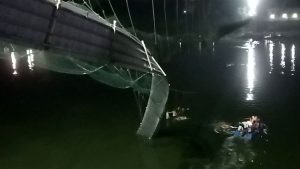 AHMEDABAD:: Prime Minister Narendra Modi will be visiting Morbi in Gujarat on Tuesday afternoon where the collapse of a suspension bridge killed over 140 people. The overcrowded “hanging bridge” collapsed on Sunday evening in one of the biggest disasters the country has recently seen.
Just hours before the incident, PM Modi had reached his home state to lay the foundation stone of the Tata-Airbus manufacturing plant, which is the country’s first private facility to manufacture aircraft, in Vadodara. As tragedy hit the Morbi district, he asked Chief Minister Bhupendra Patel to mobilize rescue operations. The Chief Minister’s office on Monday said PM Modi would be visiting on Tuesday.
“In this hour of grief, the government is with the bereaved families in every manner. The Gujarat government has been carrying out relief and rescue operations since yesterday. The central government too is extending all help to the state government,” PM Modi said earlier on Monday, while addressing an event to mark the birth anniversary of Sardar Vallabh Bhai Patel.
An event to be held on Monday – where PM Modi was scheduled to address party workers – was canceled in the wake of the tragedy.
The footbridge over the Machchhu River in the centre of Morbi town – which was built during the British rule – reopened last week after repairs. It was packed with sightseers who were enjoying holiday festivities when it collapsed on Sunday evening. The bridge plunged about 33 feet into the river, according to reports.
Gujarat-based electrical appliances maker Oreva group, known for its Ajanta clocks, had been in charge of maintaining the bridge for 15 years, said Sandeepsinh Zala, the chief officer of Morbi municipality, reported news agency Reuters. It is also not clear whether the bridge had a clearance c 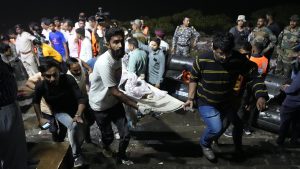 ertificate.The bridge that collapsed in Gujarat’s Morbi yesterday, killing more than 140 people, was opened to the public ahead of schedule by the private company maintaining it, documents reveal. The repairs were carried out by the Gujarat-based Oreva group, which describes itself as the world’s largest clock manufacturer and makes lighting products and e-bikes.
Oreva was hired to maintain the historic colonial-era bridge in March. The bridge was reopened to the public seven months later, on October 26, when the Gujarati New Year was celebrated. The company was bound by its contract to keep the bridge shut for at least eight to 12 months for maintenance and repairs.

After opening it before time, the company even sold tickets at ₹ 17, allegedly without ever securing a fitness certificate from the civic authorities. Tickets were sold for ₹ 12 to ₹ 17 yesterday; there was no apparent crowd control, either by the private company or by the administration. While opening the bridge last week, Oreva Managing Director Jaysukhbhai Patel had said that the company had done “100 per cent renovation in 2 crores”.
(Bureau Report with Media Inputs).