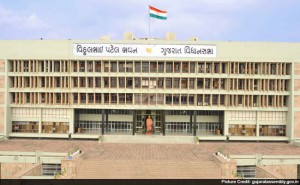 AHMEDABAD: It’s a proposal deemed so contentious that it has been rejected by two Presidents, including Pratibha Patil and APJ Abdul Kalam, but the Gujarat government is determined to push ahead with a law aimed at combating terrorism and organized crime.
Today, the Gujarat Assembly passed the proposed legislation for the fourth time in 12 years. The bill has always been passed in the state, because the ruling BJP has a clear majority, but in the past, the President has refused to sign off on the proposal, which has kept it from becoming a law.

“The law is the need of the hour…not just terrorism but even organised crime needs to be dealt with firmly,” said Junior Home Minister Rajni Patel.
“Despite reservations from past Presidents, no changes have been made. The government has just changed the nomenclature and the content remains same,” countered Congress leader Shaktisinh Gohil.
The Gujarat Control of Terrorism and Organised Crime Bill, passed by the state legislature today, has been amended, but still vests the police with far too much power, say critics. Authorities are entitled to intercept phone calls; recordings are admissible in the court as evidence.
Confessions made before senior police officers can be submitted as evidence in court. Human rights activists warn that this means suspects in custody can be tortured or coerced into making statements that can be used against them. A suspect can be kept in custody for 30 days, instead of the current 15-day period; and if a public prosecutor recommends it, the police can take 180 days to file a chargesheet – that’s twice the current time limit and can subject a suspect to immense harassment, say critics.
The first version of the proposal was sent to the Centre in 2004, when Narendra Modi was Chief Minister; the Union government headed by the BJP’s Atal Bihari Vajpayee had sent it back, asking for major changes. The coalition government led by the Congress also objected to later versions of the bill.