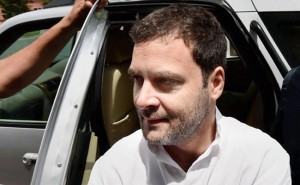 NEW DELHI: Rahul Gandhi today accused the government of “carving out the net and handing it over to corporates” as he took up the cause of net neutrality in his second speech in Parliament in three days.”Over 1 million people are fighting for net neutrality,” the 44-year-old Congress vice president said in the Lok Sabha, asking for a change in the law or a new law to protect net neutrality.
In an all new avatar, Congress Vice President Rahul Gandhi is taking on the Narendra Modi government on a host of issues catering to different classes of people. After wooing farmers and targeting the Bharatiya Janata Party-led National Democratic Alliance government on Land Acquisition Bill, Rahul lent his support to net neutrality in India.
Taking a dig at the government, Rahul started his speech by praising the Prime Minister and once again accused the government of being pro-corporate. “Net Neutrality is an important issue. It means everyone should have Net Ka Adhikaar. Everybody on social media is talking about net neutrality, but this government wants to sell the Internet to corporates,” said Rahul
He had earlier moved an adjournment motion in the Lok Sabha seeking suspension of question hour and a debate on net neutrality which has seen netizens taking on the might of some telecom operators who want to control and charge the websites their subscribers visit. Rahul added, “We want that consultation with TRAI be stopped, and there should be a law on net neutrality. I would request the government to stop TRAI’s decision.”
Telecom Minister Ravi Shankar Prasad responded to his comments saying that the government has always backed net neutrality and TRAI’s recommendations are in no way binding.”We believe that the entire country can access net. We dream of Internet for all. We our committed to it. Our government never succumbs to any corporate pressure and will never succumb to corporate pressure,” Prasad said.
“TRAI can make a recommendation under TRAI Act but the final decision rests with the government,” Prasad added.He questioned Rahul as to why the previous Congress-led United Progressive Alliance (UPA) government had blocked Twitter handles of several people.Praising Rahul, former Jammu and Kashmir Chief Minister Omar Abdullah tweeted, “Hopefully we now have an opposition leader who will take the fight to the government and not just wait for it to mess up.”
The TRAI has sought feedback from the general public on a draft proposal by April 24 and it has received over nine lakh responses backing net neutrality,The net neutrality gives equal access opportunities for all websites and there is no limitations on what websites you can or cannot access. There is no speed modification of any particular website and no payment for accessing apps like Whatsapp, Skype, Viber.
Ever since he has returned from his nearly two-month long and mysterious sabbatical, a ‘rejuvenated’ Rahul was first seen attacking the government in his mega Kisan Khet Mazdoor rally and then taking on the government in the Lok Sabha on the very next day.It is also seen as an attempt by Rahul to change his as well as party’s image after a drubbing in the Lok Sabha elections.