BAMALA: (punjab) At a rally in Punjab’s Barnala district today, Congress president Sonia Gandhi targeted Narendra Modi for his much-discussed “Gujarat model” of development.””God save the country from this sort of model,” she said, “it has many problems.”Mr Modi, 64, is the BJP’s prime ministerial candidate and is forecast to lead his party to its strongest-ever electoral result. Mrs Gandhi’s son, Rahul, is leading the campaign for the incumbent Congress, which, after 10 years in power, is expected to perform abysmally. 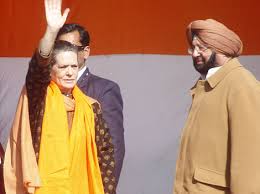 Mr Modi has countered Congress attacks on the “Gujarat model” – an alpha-phrase of this election – by suggesting that the Congress places first the interest of the Gandhis, its First Family. At an election meeting earlier this month, he said, “An American paper has presented a new model – of having one lakh rupees and converting that to Rs. 300 crore in four years. This is the RSVP model – Rahul, Sonia, Vadra and Priyanka.”
The business dealings of Robert Vadra, who is married to Priyanka, the daughter of Mrs Gandhi, have been tagged as illicit by the BJP, which alleges that he was gifted sweetheart land deals in Haryana, where the Congress is in power. “They criticize the Gujarat model…can they please explain the Vadra model?” asked the BJP’s Ravi Shankar Prasad yesterday, in keeping with his party’s stand that Mr Vadra has accumulated a vast fortune on the strength of his powerful family links.
On Tuesday, Priyanka, 42, who is managing the campaigns for Sonia and Rahul Gandhi in their constituencies in Uttar Pradesh, addressed the whorl of allegations around her husband for the first time. “My family is being humiliated, there are things that are said about my husband,” she said to voters in Raebareli. Since then, she has taken on Mr Modi over a series of issues, accusing him of engineering the Gujarat model to reward  crony capitalism, and of double-speak on the issue of women’s safety and empowerment.