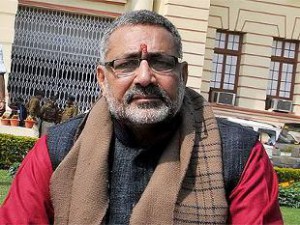 NEW DELHI : For Union minister Giriraj Singh, Tuesday turned out to be his second bad day at work. A day after being forced to apologise in Parliament over his racist remarks on Sonia Gandhi, he was summoned by Prime Minister Narendra Modi.
PM Modi met Mr Singh in his office in Parliament soon after a meeting this morning of the BJP parliamentary party. Sources say so strong and caustic was the prime minister’s reprimand that the minister broke down as he silently watched.
Mr Singh later denied either meeting the prime minister or breaking down. But his senior colleague Venkaiah Naidu said, “Saying sorry does not belittle a man. Giriraj had expressed regret but even after that he was hounded. That’s why he was upset.”Giriraj Singh has been widely condemned for saying earlier this month: “If Rajiv Gandhi had married a Nigerian lady and not a white-skinned woman, then would the Congress have accepted her leadership?”
The minister claimed that the remarks were off the record, but was not spared a flood of outrage from across the nation.On Monday, he apologised in the Lok Sabha after opposition uproar. The Congress had demanded his sacking, and a statement from the prime minister.Congress leader Jyotiraditya Scindia said in Parliament that the comment insulted not just women of the country, but every citizen and also Nigerians.
“The minister should resign and Prime Minister should apologise to the house for such preposterous statements. Why is the PM on maun vrat(silent?),” he said.Since he took power last year, the prime minister has warned his party leaders, more than once, against speaking out of turn and provoking controversies that have diverted attention from his government’s development agenda.