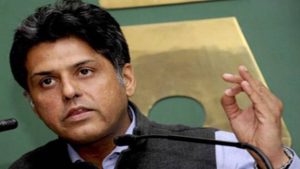 NEW DELHI: In yet another sign of discord between Congress and party MP Manish Tewari, the latter on Monday refused to sign a letter by the Opposition against the ‘Agnipath’ recruitment scheme. Tewari was one of the seven Opposition MPs who met Defence Minister Rajnath Singh today to raise concerns about the newly launched recruitment scheme for the armed forces. Mr Tewari had verbally supported the opposition to the Agnipath scheme. Today, he said he was in favour of modernisation but was against the implementation of Agnipath. Still, he refused to sign the letter, the sources said.
However, only six of these MPs signed a memorandum seeking withdrawal or scrutiny of the scheme, before submitting it to Rajnath Singh. The Opposition members who attended the meeting included Sudip Bandyopadhyay and Saugata Roy from TMC, Supriya Sule from NCP, Rajni Patil, Shakti Singh Gohil and Manish Tewari from the Congress, and AD Singh from RJD.
It should be noted that back on June 16, Manish Tewari had lent his support to ‘Agnipath’ for the first time, soon after the Central government announced the new recruitment model. Later on June 30, the Congress had to distance itself from Tewari after he once again extended support to the ‘Agnipath’ recruitment scheme, which was a direct contradiction to the party’s official line of opposing the initiative.

During the meeting with Rajnath Singh earlier today, the Opposition leaders, including Manish Tewari, spoke about “huge unemployment” in the country being the reason for the large number of applications for the scheme. “The Opposition said that the fact that people have applied in large numbers for the scheme is significant as there is huge unemployment in the country and asked why the government was not addressing it?” said sources.
The leaders also condemned the government for dragging the army into politics. They also asked the government why the personnel from the armed forces were holding press conferences instead of politicians. Army Chief Manoj Pande, Navy chief Admiral R Hari Kumar and Other senior officials of the tri-services were also present at the meeting.
The letter, listing a set of demands, was signed by six opposition MPs including Congress’s Shaktisinh Gohil, Trinamool Congress’s Sudip Bandyopadhyay and Sougata Roy, Nationalist Congress Party’s Supriya Sule and Rashtriya Janata Dal’s AD Singh. The committee on Defence chaired by Mr Singh has 20 members– 13 from Lok Sabha and around 7 from Rajya Sabha — from across the board.
The unveiling of the Agnipath scheme last month was followed by violent protests in many northern states including Bihar. The protest, which continued for a week, was backed by many opposition parties, who demanded a rollback. Earlier this week, the Indian Air Force said it has received nearly 7.5 lakh applications under the scheme.
Mr Tewari — one of the G-23 leaders whose explosive critical letter to Sonia Gandhi had made headlines — had criticised the UPA government in his new book over its reaction to the 26/11 terror attacks.