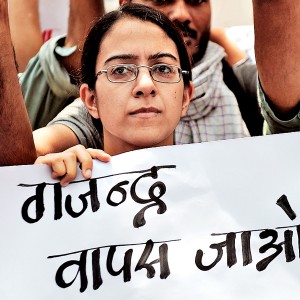 The students of Film and Television Institute of India announced their resolve to continue their 57-day-old strike and their plans to take it nationwide, to different student bodies in various campuses across India. The students are currently protesting government’s appointees to the FTII Society and to the post of chairman, given to Gajendra Chauhan.
Addressing the press in New Delhi a collective of current and former students said that the problem was no longer just an FTII issue, but a “national debate” as cultural and educational spaces across the country were being threatened and squeezed. FTII had staged a day long protest at Jantar Mantar and Parliament Street on August 3.

The students said that though they were in Delhi to “open channels of communication” with the Information and Broadcasting Ministry, things were at a “stalemate” as of now. While the Joint Secretary from the Ministry met the students and said that he would try and raise their concerns with the minister, so far there has been no meeting with either minister Arun Jaitley or Minister of State Rajyavardhan Singh Rathore.
FTII’s students and alumni have been in touch with Delhi University, Jawaharlal Nehru University, Jamia Milia Islamia in Delhi, Jadavpur University and the Satyajit Ray Film and Television Institute in Kolkata, colleges in Ahmedabad and in Pune itself, where they say they have had “positive interactions” with other student bodies.
“Wherever we went, we found similar stories of students worried about people appointed to their institute who were not qualified to lead it,” said Sakshi Gulati, a current FTII student, who is in Delhi to organise the protest and to try and open channels of communication with the Information and Broadcasting Ministry.
“There is a strange sort of censorship that has crept in campuses, where even a play can be banned for being ‘anti-government’,” she added referring to the crack down on the dramatics society of DU’s Khalsa College.
There is also the trend of appointing people associated with the ruling party. This, the students said, was not new to this government, but had been happening for years. “Which is why we are questioning the very process of appointments and asking it be made transparent,” said Vikas Arz, another FTII student.

The student body is also trying to reach out to Pondicherry University, where students are on a hunger strike against their Vice-Chancellor.
Prateek Vats, a former students helping with the protest, said that it was a dangerous sign and mark of some agenda that all those associated with the ruling party had been posted in the FTII society. “Narendra Pathak, one of the new appointees, was the ABVP president who had spoken against FTII students when they screened Anand Patwardhan’s film last year,” said Vats. “Goons had beaten up students for the screening. It shows that these appointees no nothing about FTII,” he added.
The students also said that there were divisions amongst the BJP itself, as artists such as Shatrughan Sinha and Paresh Rawal, associated with the party, had also expressed concern over the appointment of Chauhan and others.