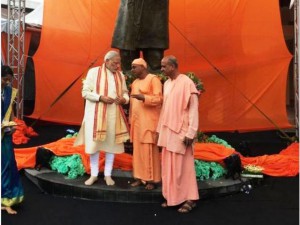 KUALA LUMPUR: Minister Narendra Modi on Sunday said that from the Vedas to Swami Vivekananda, India has a rich cultural history and that the sage is the soul of India.

“From the Vedas to Vivekananda, India’s culture is rich,” Mr. Modi said after unveiling a statue of Swami Vivekananda at the Ramakrishna Mission in Petaling Jaya, near Kuala Lumpur, on the second day of his visit to Malaysia.Mr. Modi said, “I am sure this statue will be a source of inspiration to the people here.”

Of Malaysia’s total population of around 30 million, around two million are of Indian origin.“We should try to install Swami Vivekananda in our heart and soul.” The pursuit of truth brought Swami Vivekananda and his guru Ramakrishna Paramhans together.
“Swami Vivekananda is not the name of a person. It is about the aatma [soul] of India,” a tweet by Prime Minister’s Office, quoting Mr. Modi said.
“Narendra [Swami Vivekananda] was in pursuit of the truth. He was not looking for any Guru. Similarly, neither was Ramakrishna Paramhans looking for a disciple. “It was pursuit of truth that got them together,” he said.
The Ramakrishna Mission complex in Petaling Jaya came up in 2001.Mr. Modi, who arrived in Kuala Lumpur on Saturday, attended the 13th ASEAN (Association of Southeast Asian Nations)-India Summit and then the 10th East Asia Summit on Sunday.