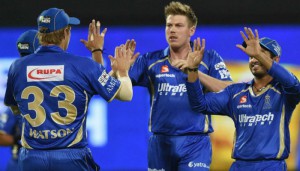 NEW DELHI: In a stunning revelation, a Rajasthan Royals (RR) player claimed that he was approached by a Ranji player to fix Indian Premier League (IPL) matches. The RR player informed the anti-corruption team of the Board of Control for Cricket in India (BCCI) about the offer, according to reports.
The Anti-Corruption & Security Unit (ACSU) took up the matter and during questioning, the RR player revealed that his Mumbai-based Ranji team-mate offered him money to follow a pre-decided pattern of play, a leading daily reported. The 2008 champions of the cash-rich league will play their first game of the season today against Kings XI Punjab in Pune.
Earlier, former India captain and RR mentor Rahul Dravid had called for exemplary punishment to tackle fixing and request players to be extra vigilant to avoid the infamous spot-fixing episode which curtailed the career of S Sreesanth. As a fall-out, the Supreme Court ordered N Srinivasan to step down as BCCI president.