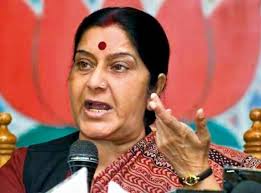 NEW DELHI : External Affairs Minister Sushma Swaraj today did not rule out a meeting between Prime Minister Narendra Modi and his Pakistani counterpart Nawaz Sharif on the margins of a United Nations General Assembly session later this month, saying the government would “respond according to the situation that develops”.
“We well respond as the situation develops. We are not going with a predetermined mindset,” she said. Ms Swaraj was presenting a three-month report card of her ministry. India called off Foreign Secretary-level talks with Pakistan last month after Islamabad’s high commissioner in Delhi Abdul Basit met separatist leaders from Jammu and Kashmir.
The Foreign Secretary-level talks were scheduled to be a precursor to a bilateral meeting between Mr Modi and Mr Sharif in New York. Prime Minister Modi had later said that Islamabad made a “spectacle” of the tentative peace process. On Sunday, after reviewing the situation in flood-ravaged Jammu and Kashmir, the Prime Minister wrote to Mr Sharif offering assistance in flood relief operations in areas “across the Line of Control”.
Floods have devastated large parts of Pakistan-occupied Kashmir. Related PM Modi’s Small Steps Making Big Difference to Sentiments: Analysts BJP Strategy for State Elections: Seek Votes in Name of PM Modi Day 5 of Manipur Blockade: Government Climbs Down, Protestors Defiant “I was informed that the damage to life and property is equally, if not more, severe in areas across the Line of Control as well… In this hour of need, I offer any assistance that you may need in the relief efforts that will be undertaken by the Government of Pakistan.
Our resources are at your disposal wherever you need them,” Mr Modi said. The PM extended all help to Pakistan and said, “India will never hesitate from doing work of humanity.”