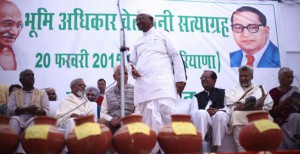 NEW DELHI : With protests by the opposition and several farmer organisations against the recent amendments in the Land Acquisition Act by the Centre via an ordinance, the BJP has started a rethink. According to sources   Senior leaders of the BJP met this evening to explore the possibility of modifications to the land ordinance.
BJP leaders, led by Home Minister Rajnath Singh, External Affairs Minister Sushma Swaraj and Rural Development Minister Chaudhary Birendra Singh, met at the residence of the Home Minister. Also present in the meeting were activists of Bhartiya Kisan Union, BJP’s front organisation for farmers.
Sources say the BJP is worried about Anna Hazare’s march to Delhi against the land acquisition ordinance which the government plans to enact in the budget session of Parliament. Due to the protest, the BJP government, which has enacted several pro-reform measures, was worried about an anti-farmer tag.
The government’s dilemma is that while promulgating the ordinance in December last year, it had claimed that it was to improve ease of doing business. That is why going back on the legislation fully or making drastic changes will amount to a climb down on its reform agenda. The ordinance was aimed at easing land acquisition rules to kickstart hundreds of billions of dollars in stalled projects.
About 5,000 farmers from across the country have begun a march from Palwal in Haryana and will reach Jantar Mantar in Delhi next week to hold a protest. Congress Vice President Rahul Gandhi, who had earlier pushed for the land act in 2013, will also address a dharna at Jantar Mantar on February 25.
Activist Anna Hazare, along with members of several farmers’ organisations, is scheduled to hold a two-day protest against the ordinance at Jantar Mantar. The Arvind Kejriwal-led Aam Aadmi Party has also expressed its willingness to join Anna’s protest beginning Monday, if the social activist wants it to do so.
On December 29 last year, the government had recommended promulgation of an ordinance making significant changes in the Land Acquisition Act including removal of consent clause for acquiring land for five areas of industrial corridors, PPP projects, rural infrastructure, affordable housing and defence.
Restrictions on buying land, under a law championed by the last Congress government, are among barriers holding up projects worth almost $300 billion or nearly Rs. 20 lakh crore in sectors such as rail, steel, mining and roads.
The ordinance will have to be cleared by the next parliamentary session which starts later this month.With the meeting of its top leaders, the government seems to be preempting the protest to signal that if there was need to bring in pro-farmer modifications the government is not averse to it. BJP sources say minor pro-farmer modifications to the bill might make it acceptable to political forces like Samajwadi Party and the Biju Janata Dal.