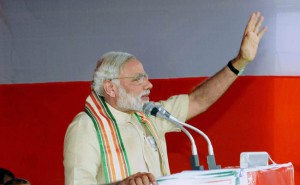 PATNA: :  Prime Minister Narendra Modi’s response to the fierce attack on him two days ago by Bihar Chief Minister Nitish Kumar, Congress President Sonia Gandhi and the RJD’s Lalu Yadav, was a jibe.
At a ‘Parivartan rally’ in Bihar’s Bhagalpur today, PM Modi scoffed, “Such big leaders came together at Patna’s Gandhi maidan and could only chant Modi, Modi, Modi, Modi.” That he thought happened only at NDA rallies and his trips abroad, the PM quipped.
He said not only the people of Bihar but also those in the rest of the country were disappointed that the rival alliance “uttered not a word on the plans it has for Bihar’s development.
In his speech today at his fourth rally in Bihar, where elections will be held by November, PM Modi sought to underscore that its development agenda sets apart his BJP from rival parties. He said he was “happy” that his announcement last month of a central aid bonanza for Bihar had forced rivals to “come to the issue of development in this election.”
“This election is for the Bihar assembly, those who have ruled for 25 years need to account for their performance, not me. I will furnish a complete account in the Lok Sabha elections,” the PM said.
Like before, several scathing attacks on Chief Minister Nitish Kumar were at the centre of his speech today.Mr Kumar answered swiftly, alleging in a tweet as PM Modi’s speech ended, “All that could be heard in it was me, me…only me (Modi).”
The campaign for Bihar has so far been marked by a high-voltage exchange of words between Mr Kumar, who hopes to win a third term as chief minister and PM Modi, around whom the BJP has built its campaign for the state.
Two years ago, Nitish Kumar had thrown the BJP out of their 17-year alliance as it became clear that it would project Mr Modi for PM. He now takes the party on with new allies the RJD and the Congress.Yaad unko aati hai jo bhool jaate hai, unko nahi jo Bihar ko bhoole hi nahi, says PM Modi on Nitish Kumar’s comment that ‘PM remembered Bihar after 14 months’.