LUCKNOW: The Election Commission on Thursday censured Union Minister Beni Prasad Verma for his ‘insulting’ remarks against BJP prime ministerial nominee Narendra Modi.Slamming Verma, the EC said that further violation could result in banning him from poll campaigning. Recently, the minister had launched an acrid personal attack on Modi calling him an animal. 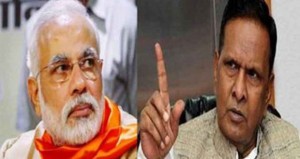 The Congress leader touched a new low while addressing party workers in Gonda in Uttar Pradesh. Beni called Narendra Modi an ‘animal’ and said that he needs to be taught a lesson.He had also said that Modi will never reach the PM’s post and go to “graveyard”.Beni had attacked Modi’s close aide Amit Shah as well. He reportedly said that once Rahul Gandhi becomes the Prime Minister, Modi and his close aide Amit Shah will be “jailed for life” for Godhra riots.