NEW DELHI : Bharatiya Janata Party national general secretary Amit Shah said on Tuesday that the party’s door was open to all those who agreed with its agenda even as he was confident that the BJP-led National Democratic Alliance would get a comfortable majority.A close aide of the BJP’s prime ministerial nominee, Narendra Modi, Mr. Shah said even though the party would get the numbers on its own, it was open to the idea of welcoming even “one MP from any party” who wishes to support the BJP’s agenda. 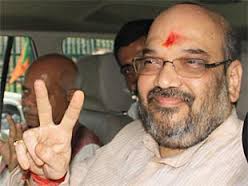 The BJP leader said that his assessment was that the NDA would get between 290 and 305 seats.Predicting a sweep for the party in western and eastern Uttar Pradesh, Mr. Shah said there had been a turnaround in the party’s popularity in the crucial State that sent 80 legislators to Parliament.Even as he was credited with strengthening the party’s position in U.P., Mr. Shah said it was the “collective effort” of the party functionaries that gave a fillip to the campaign in the State. He was confident the BJP would win the Azamgarh seat, considered a Samajwadi Party stronghold, where Mulayam Singh is the candidate, and said the party “fought well” in Amethi against Congress vice-president Rahul Gandhi.
He disagreed with the exit poll projections that show the party not performing well in Punjab and West Bengal. “There will be a significant rise in the party’s vote share in States like West Bengal and Bihar. The vote share in Rajasthan and Madhya Pradesh will also be in favour of the BJP,” he said.Buoyed by the exit poll results that have put the NDA in the lead, the party said its performance would be better than what the exit polls predicted for Punjab and Maharashtra. “Punjab has twice proved the exit polls wrong. Even in Maharashtra, the NDA results will meet expectations,” Mr. Shah said.
Declining to comment on his new role in the party, whether he will join the government if the party wins or move to Vadodara, Mr. Shah said he was content with his existing position.