ALWAR: Yoga Guru Baba Ramdev was left red-faced yesterday when a TV camera caught him warning Mahant Chandnath, the BJP candidate from Alwar in Rajasthan, not to talk about money when the mics were on.But the mics recorded the alleged conversation, and replayed later, much to the embarrassment of Ramdev, who is busy touring various parts of the country, mobilizing popular support for Narendra Modi, the BJP’s prime ministerial nominee. 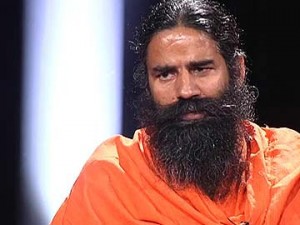 The Yoga Guru was responding to the BJP candidate’s plea that he was running short of funds, and needed more money to continue with his campaigning. Alwar goes to polls on April 24, alongwith four other parliamentary constituencies in Rajasthan.Mr Chandnath is engaged in a tough contest in Alwar with union minister Bhanwar Jitendra Singh, who won the seat comfortably in 2009.
The alleged conversation took place minutes before the commencement of a press conference which was to be addressed by them. Stop talking here, are you a fool ?” replies Ramdev to the BJP nominee’s lament, as he looks around rather sheepishly. Mr Chandnath probably gets the point, and is seen smiling.When contacted, Mr Chandnath denied that he had spoken about his fund-crunch Ramdev. But the opposition Congress pounced on the footage, and asked the Election Commission to arrest the Yoga Guru and the BJP’s Alwar nominee  for allegedly distributing money to voters.
In a letter to the Election Commission, K C Mittal, AICC legal department secretary, demanded that FIR be registered against the leaders involved in the malpractice, and sought the BJP nominee’s disqualification.(Report-PTI)