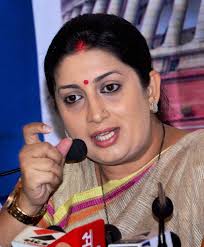 NEW DELHI : Human Resource Development (HRD) Minister Smriti Irani on Tuesday refused to comment on the ongoing Four Year Undergraduate Programme (FYUP) tussle between Delhi University (DU) and University Grants Commission (UGC).“I am not at liberty to speak,” said Irani.
The statement came amid criticism from the DU executive council, who are also planning a hunger strike against the UGC directive Earlier today Shri Ram College of Commerce (SRCC) had put up a notice stating deferment of admission.The University Grants Commission (UGC) had on Sunday issued a directive to DU asking it to scrap the FYUP.
The order fuelled criticism from some quarters that the UGC was trying to over step boundaries.
DU students as well as aspiring students have been facing a lot of difficulties due to ongoing tiff between the UGC and the university over the FYUP.