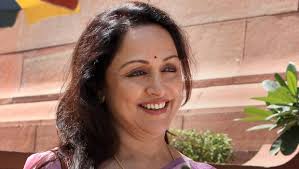 VRINDAVAN:  Actor-turned-BJP parliamentarian Hema Malini has provoked anger after saying that widows from Bengal and Bihar should stay there and not crowd the holy city of Vrindavan in Uttar Pradesh.”Hema Maliniji’s remark against widows of Vrindavan highly Parochial and uncalled for. She must withdraw it (sic),” tweeted Congress leader Digvijaya Singh.
Vrindavan, which falls in the actor’s Mathura constituency, is home to thousands of widows.
On Tuesday, the 65-year-old filmstar visited a shelter home that was in very poor state and made several controversial remarks, like: “Vrindavan widows have a bank balance, good income, nice beds, but they beg out of habit.”She also said, “There are 40,000 widows in Vrindavan. I think there is no more place in the city. A large population is coming from Bengal… that’s not right. Why don’t they stay in Bengal? There are nice temples there. The same is true for those from Bihar.”
In response, some of the women have lashed out at the BJP MP, who was elected by an impressive margin from Mathura in the May national election.”We stay in Vrindavan because we like it. This is our country. We can stay anywhere we want,” said a woman.Another said, “We left our homes because there’s no peace there. It’s peaceful here as there are prayers.”