NEW DELHI: Senior Congress leader Digvijaya Singh on Thursday said he will formalize his relationship with television journalist Amrita Rai when her divorce comes through, agency reported. Bringing up the recent controversy surrounding Narendra Modi’s marriage, Digvijaya said, “I have the courage of my conviction and to face the consequences. He (Modi) is a coward, who had hidden his wife for years.” 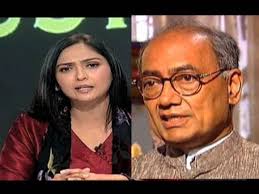 “I don’t hide things like Mr Modi. It is a private matter which I have made public,” the Congress leader said on his relationship with the TV journalist. “I don’t hide my relationship, which Mr Modi does. I am not a coward,” he added. Shortly after their pictures and videos went viral online, Digvijaya Singh and Amrita Rai admitted to being in a relationship on Twitter on Wednesday.
“I have no hesitation in accepting my relationship with Amrita Rai. She and her husband have already filed a mutual consent divorce case. Once that is decided we would formalise it. But I do condemn encroachment in our private life,” posted Singh, 67, across two tweets on Wednesday. Rai echoed the sentiment in a tweet timed to coincide with Singh’s. “I have separated from my husband and we have filed a (sic) mutual consent divorce papers. After which I have decided to marry with (sic) Digvijaya Singh,” she posted from her Twitter account.
In another tweet, Rai seemed to indicate that the pictures were leaked as a result of a hack. “My email/computer been hacked & contents tampered with. It is a serious crime in India & encroachment of my privacy. I strongly condemn it,” she tweeted. Singh’s wife died of cancer in February last year. Rai is a news anchor with Rajya Sabha TV.
Meanwhile, BJP’s  Sushil Kumar Modi took a jibe at Singh, where else, but on Twitter. “Congratulations Digvijaya Singh for having an affair even at 67,” he wrote. Cong spokesman Shakeel Ahmed said, “If the tweets are genuine… they have explained their position.” AAP’s Somnath Bharti condemned the relationship from a moral point in a series of tweets. Calling Singh “characterless”, he tweeted, “he knew many (sic) such relations, if he doesn’t expose on his own, I will file a PIL after the election gets over for him to reveal all such cases.” However, the tweet could not be found after a few hours. The screenshots, though, were doing the rounds on Twitter.
A video posted on Tuesday on Inagist showed Singh performing a religious ritual with the journalist. The video, also available on YouTube, was posted on April 11 from a user called “Raja Mama” with the title, “Is Amrita Rai Secret/Second Wife of Shri Digvijaya Singh?” Another copy of the same video, was posted back on July 20, 2013, and is titled “Digvijay Singh pooja at alandi by ameen sheikh”. And then there were pictures of Singh and Rai in intimate poses. Another YouTube video posted on Tuesday by a user called “Expose AAP” put together a slideshow of the very same pictures.
While the rumblings had begun to gain momentum on the web on Tuesday, a report published in the daily Millennium Post on Wednesday brought the affair in mainstream. By Wednesday afternoon, both Singh and Rai had accepted their relationship on Twitter.