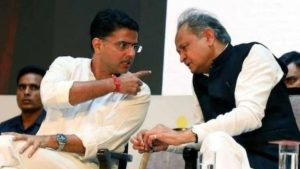 NEW DELHI / JAIPUR: “How did Ashok Gehlot do this? Did not expect this from Gehlot,” Sonia Gandhi reportedly told AICC in-charge for Rajasthan Ajay Maken and Kharge during the meeting.
Congress observers Mallikarjun Kharge and Ajay Maken on Monday met Sonia Gandhi in Delhi and apprised her of the crisis in Rajasthan, with the party president reportedly expressing disappointment with the stand of Chief Minister Ashok Gehlot, sources told.
Sonia Gandhi has sought a written report about the crisis in Rajasthan by Tuesday. “I have briefed Congress President… she has sought a detailed report which I will send to her..,” Maken told media persons after the meeting.
The Congress in Rajasthan plunged into a crisis on Sunday after around 90 MLAs submitted their resignation to Rajasthan Assembly Speaker CP Joshi over a possible move to appoint Sachin Pilot as Gehlot’s successor. To register their protest, the MLAs skipped the Congress Legislative Party (CLP) meeting and huddled at the residence of Cabinet minister Shanti Dhariwal.
According to Congress sources  Gehlot was ready on the proposal authorising Sonia Gandhi to choose the Rajasthan CLP leader, but after the revolt of the MLAs, the CM said the legislators were not listening to him too.
A rebellion by more than 90 loyalist MLAs may cost Rajasthan Chief Minister Ashok Gehlot his shot at the Congress chief’s post. Though he has apologised for the situation, the Gandhis are reportedly upset with him for “humiliating” the Congress.
Ashok Gehlot had apologised to Central observer Mallikarjun Kharge who was in Jaipur yesterday for the Legislature Party meet, sources said. Calling the parallel meeting of the MLAs and their subsequent rebellion a “mistake”, Mr Gehlot had said it “should not have happened”, sources said. He had also said he has nothing to do with it. According to sources, Mr Kharge has expressed the opinion that despite Mr Gehlot’s claims of non-involvement, such a rebellion could not have happened without his consent.
Maken said the Congress president had asked the AICC observers to meet all MLAs separately. The CLP meeting was called to pass a resolution authorising the Congress president to take a decision on Gehlot’s successor. Terming the move by the MLAs “indiscipline”, Maken said the legislators and ministers loyal to CM Gehlot cannot pose conditions to the party leadership as they amount to a “conflict of interest”.
“Some representatives of MLAs, ministers came and put forth three demands. Their condition is that the CLP leader be elected after October 19 and any decision should be taken after that… This cannot happen as those who are moving the resolution after October 19 would themselves take the decision and this would amount to a conflict of interest,” PTI quoted Maken as saying.
Mr Gehlot is to file nomination for the October 17 Congress president election tomorrow. As the Rajasthan crisis peaked, another potential candidate, Kamal Nath, arrived in Delhi and met Sonia Gandhi. “I have no interest in (Congress) President post. I’m only here for Navratri wishes,” Mr Nath was quoted as saying by news agency ANI, Sources say he may mediate in the Rajasthan crisis.
Yesterday, MLAs supporting Mr Gehlot threatened mass resignation, making it clear that if he is elected Congress president, they will not accept his bitter rival Sachin Pilot as Rajasthan Chief Minister. They skipped a party meeting yesterday, and refused to talk to Ajay Maken and Mallikarjun Kharge, who had asked to meet with them one-on-one. Stood up by the MLAs, Ajay Maken and Mallikarjun Kharge headed back to Delhi. Sources accused Team Gehlot of humiliating the central leaders.
Flagging the MLAs’ demand that any meeting on a new Chief Minister be held only after the next Congress president is elected, Mr Maken said, “It would be conflict of interest as the resolution would be passed when Ashok Gehlot may already be party chief. So, he empowers himself to decide on his own successor in Rajasthan.”The developments appear to indicate that the Gandhis are losing their grip over the party. Some in the party believe the leaders underestimated Mr Gehlot’s sway and also handled the Rajasthan transition poorly.
Mr Gehlot had been reluctant to leave Rajasthan and take on the national role, even suggesting to the Gandhis that he could handle both and should not have to give up the Chief Minister’s job. But Rahul Gandhi publicly slighted him on the double role demand, asserting that the party would stick to a “one person, one role” policy. Sachin Pilot, whose rebellion in 2020 almost brought Mr Gehlot’s government to the brink, has 20 MLAs on his side. For the second time, he has been publicly “exposed” as without enough support compared to Mr Gehlot.
(With Jaipur Bureau ).